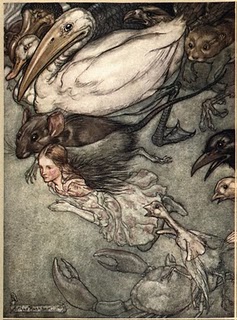 The child tossed and turned in her tangled sheets. She had been so grateful to slide in between the cold cotton covers and rest her aching head on the smooth pillow. Her mother had tucked her in and kissed her and told her to sleep.
She was a good child and tried to obey but her throat hurt and her skin burned and everything around her had taken on an unusual and frightening aspect. The woodland animals on the wallpaper no longer looked amiable and endearing. Their teeth would tear at her fragile flesh and their paws revealed sharp claws to rake at her hot, dry eyes. The fairies, so pretty and delicate on other days, wore malevolent expressions and prepared to dance round her, poking and pinching, pulling her hair. She shut her eyes to deny them reality then cautiously opened them again, determining not to look at them. She raised a hand to ward off the sight of them then watched in terror as her thumb grew out of all proportion. She stuffed it in her mouth to prove it was her own small digit but it seemed almost too large to fit. She drew it out and stared at it in horrified fascination.
She wanted to cry, she wanted her mummy, she wanted to be anywhere but in this bed of nightmares. Her eyes closed as she started to sob and a short while later she felt a hand on her forehead and a cool cloth dabbing her face. That felt so good. Cautiously she glanced at the wallpaper. The woodland scene was as it had ever been, fairies with gossamer wings dancing with rabbits and foxes, badgers and birds. Still wary, she peeped again at her hand and was relieved to see her little thumb returned to its normal size.
Years later, she could clearly recall the strange experiences of that time. It helped her when nursing her own feverish children and yet she was never quite sure that it had merely been delirium. It was as real to her as the belief that she really had been able to fly. Dreams and nightmares – an interpretation of actual events?
Thank you to BKM of 'Monday's Child' for organising and hosting this prompt-led exercise.
Posted by jabblog at Tuesday, October 05, 2010