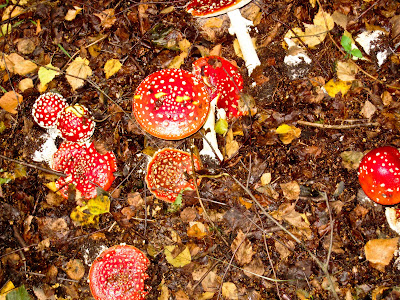 This photograph shows several stages, from immature on the left to mature and old in the centre.
Toadstools are often depicted in children’s story books. They are associated with fairies and elves, gnomes and pixies and among the most attractive are the white-spotted bright red fungi known as Fly Agaric (Amanita muscaria) 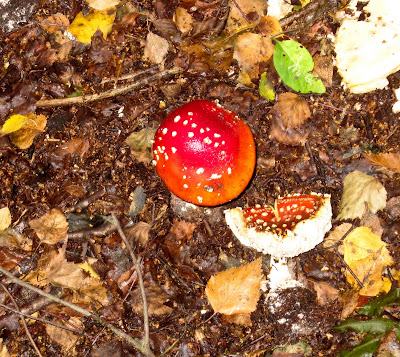 Here is a developing fungus alongside one that has been partially eaten. I don't know what eats them - something with a strong stomach, obviously, or one specially adapted!
Fly Agaric is found under birch trees or in poor soil around pine trees. It begins its life above ground as a small rocket-shaped fungus but as it develops the cap expands and becomes flatter, measuring as much as six or seven inches. It can grow to a height of ten inches though I’ve yet to see one taller than about seven inches. 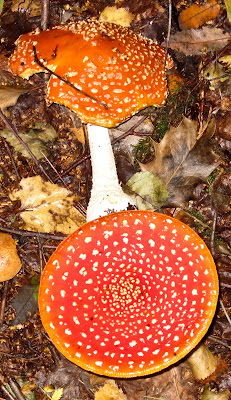 As they age the colour changes from vibrant red to orange or yellow. This mature fungus is changing colour.
Amanita muscaria is poisonous, though seldom fatal. It can cause violent intoxication – quite what that means, I’m not sure. Does it mean that the affected person becomes belligerent or just falling down, head-bangingly drunk? Or perhaps it means that the intoxication takes effect immediately with no intermediate tipsiness! Seriously, though, it is not a magic mushroom and should never be ingested. Admire its undoubted beauty but do not consume. 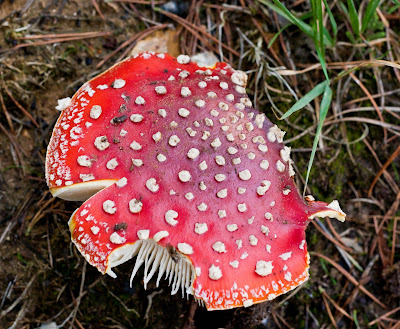 This large specimen has been partially consumed - or destroyed - showing the white gills.
Its common name of Fly Agaric refers to the fact that the caps used to be infused in milk as a way of killing flies. Now I have a vision of a line of flies sitting at a bar being invited to have ‘just one more for the road’ or of a reluctant fly being persuaded to ‘try this new drink’. Perhaps it was placed in a bowl looking alluringly like a flies’ Jacuzzi.
We saw many of these fungi during September and the early part of October but they have mainly disappeared now, although we saw a handful of fresh ones in Swinley Forest today.


Strictly speaking, these are not flowers, but they grow wild and they are beautiful!

To see more flowers, thanks to the Today's Flowers team who work so hard to organise this meme, please click here.
Posted by jabblog at Sunday, October 17, 2010