The Ninth Blog of Augustus Lazarus Cooke (Gus) – This and That 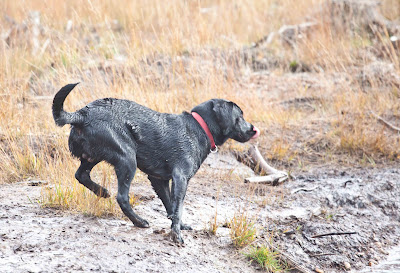 I know I’m a clever chap but I wouldn’t want my readers to think that I really can count. Like all dogs I count very simply – ‘One, more than one, more than one again’ – so my Humans have to help me when it comes to numbering my blog posts. Dogs don’t have much need for numbers, you see. We know when someone’s missing, when it’s time for breakfast or supper, and whether one dog has had more food than another and that’s all we need.
Every time Nearly every time I write my blog my friends Tia and Foxy have come to stay – and they’re here again now! I enjoy seeing them but sometimes I wonder if they’ve got a home of their own to go to. No, I don’t mean that – their Humans have gone camping for the weekend with the Explorers. I don’t know what Explorers are but I don’t think they do the kind of exploring that dogs do – at least I’ve never seen them down on all fours like us dogs, sniffing the ground and the trees and rushing in and out of the undergrowth. There’s all sorts to be found when you’re a dog. The Humans don’t know what they’re missing, stamping about the world on just two legs. I mean, they’re so far off the ground they can’t possibly be enjoying their walks like we do.
Anyway, Tia and Foxy’s Humans have gone to a Halloing camp – it seems odd to me that they have to go and live in a tent for a couple of days just to say ‘Hallo’. What?  Oh, Jenna’s just told me it’s called ‘Hallowe’en’ and it’s something to do with being the last night of October but that’s not until Sunday and they’ll be home again then – I don’t understand that but  Jenna says it’s fun for the Humans. They dress up and frighten each other and tell ghost stories and eat food burnt cooked on a bonfire camp fire. I don’t think I’d like that – I don’t like being frightened. It was bad enough last night when the garden light kept coming on. Mrs H couldn’t see anything but she wasn’t very happy this morning ‘cos she couldn’t get to sleep though maybe that was because all us Labradors were on her bed. Well, Mr H sleeps in it too, but he doesn’t get disturbed like she does.
What has been happening here at home? Well, there was a very sad happening a little while ago, (Mrs H says it was a month ago. What’s a month?) when Buddy Liver Spots died. He was at home so we all saw what was happening. Jenna and me licked his nose to try and comfort him but he didn’t notice. Frodo tried to wake him up the next day but he couldn’t. Then Mr H took him away in the car and after that we all went for a very long walk. I miss Buddy – we all do – but now we can go out for ages and not have to worry about him getting too tired or staying at home on his own. 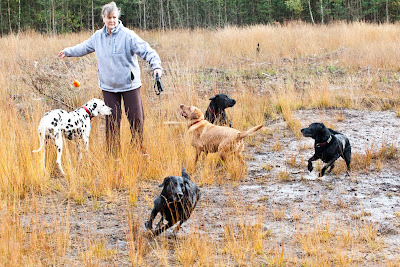 The Humans have bought us Labradors some new Kongs. The Air Kongs were fun and they floated but they didn’t last long ‘cos I chewed them. I know, I shouldn’t have, but I am still quite young.They were yellow, like funny looking tennis balls (which I also chew) The new Kongs are called Aqua Kongs and they’re orange and they're much harder and we had lots of fun with one of them this afternoon. 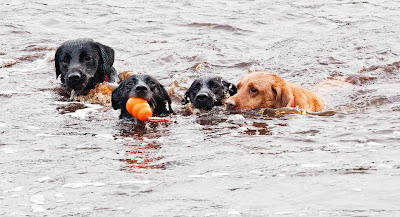 Tia's got the Kong this time and we're all swimming hard for the bank.
I’m really fast at swimming now, though not quite as fast as Jenna, so I often managed to retrieve it. I swallow a lot of water too so I burp quite a lot! 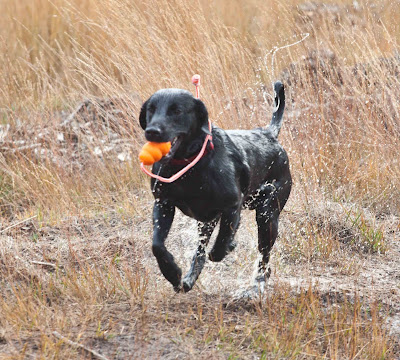 I haven't even stopped to shake. I usually wait until I'm next to Mrs H before I have a really good shake. I think she quite likes it! 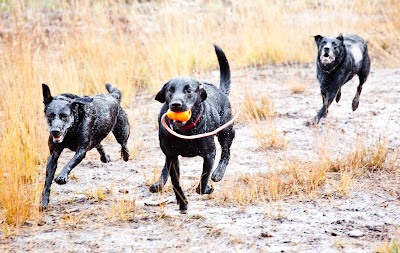 This was near the end of our water play and Tia was getting tired. She's just had another lump removed and you can see her shaved patch. If her vets keep taking bits off her there'll be nothing left soon!
I liked hurtling round with the others chasing me even though I should have been a good dog and dropped it the first time Mrs H told me to. Frodo doesn’t play in the water but he does like to fetch things indoors – shoes and hats and that sort of thing – and then me and him have a tugging game with them and Jenna joins in, too. (I really like Frodo – he’s awesome!)
I really am really, really nearly as big as Frodo now. (I think Frodo's great and I want to be just like him when I'm properly grown up) I’m very strong and sometimes I knock him over, but he doesn’t mind. He never grumbles at me. My Humans say my head is bigger than his and that I’m ‘growing into it’. What does that mean? Am I going to be all head with little body and legs and tail? I don’t think that would look very nice at all! Oh, Jenna’s just told me that it means my body is getting bigger. Phew! For a little while I thought I was going to end up like some of the weird things the Humans photograph. They found one the other day and they don’t know what it is. 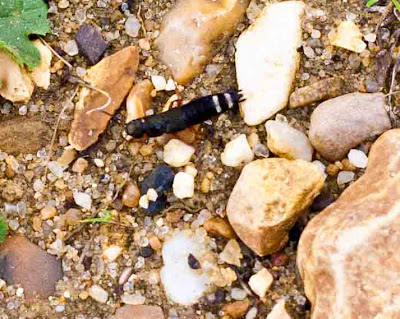 Mrs H has been looking through all her books and on the Interwet. What? Oh, the Internet. Do any of you know what it is? It moved ever so fast and it didn’t look very friendly to me.
Oh, I forgot! The Humans say I'm a proper dog now 'cos I cocked my leg the other day. Mrs H wanted a photograph of me doing it but a dog must have some privacy so I haven't done it again.
Time for some shut-eye now. A growing lad needs his sleep!
Hwyl fawr am nawr! (That’s Welsh for ‘Goodbye for now!’)
Posted by jabblog at Saturday, October 30, 2010