Yesterday’s walk - Gus grows up and a small tragedy 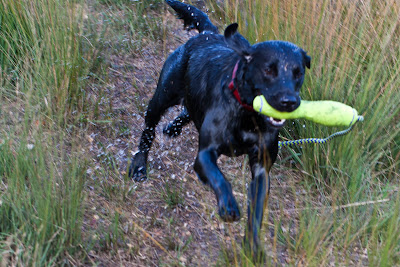 Gus carries the Air Kong
Gus is 13½ months old now and growing into quite a big boy. He learns very quickly and is a wonderful retriever, always keeping his eye on the ball or the Air Kong. He is as fast over ground as Jenna and nearly as speedy as her in the water but there is one area in which he has taken time to mature. All our other dogs cocked their legs the day they turned six months old but Gus was content to continue discreetly squatting, like Jenna, until yesterday, when he cocked his leg for the very first time. We felt that our little boy had come of age!

Two dogs, one Kong and Jenna, on the right, wins the prize.
Gus is intent on taking part in the 2012 Olympics and has been practising hard for the Long Jump event. So far he has only practised over water and still has to perfect his landing. At the moment his tail ruins any chance of breaking a record, I’m afraid. 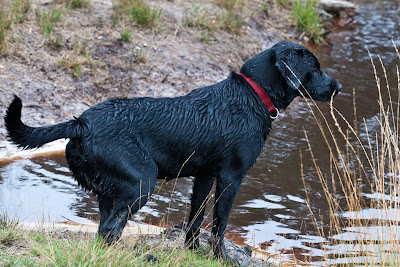 Like all good athletes Gus mentally rehearses his jump 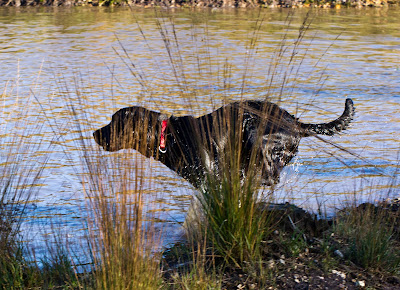 Like a tightly coiled spring he is ready to leap forward 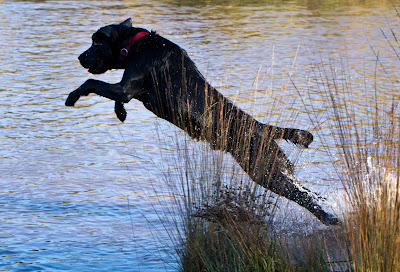 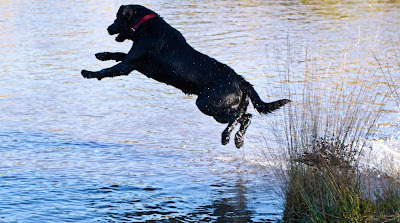 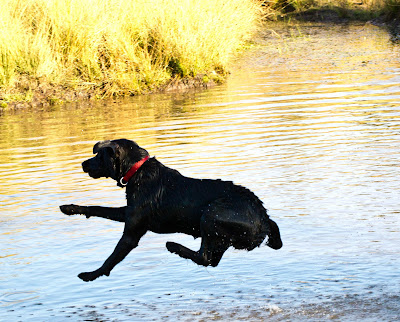 Preparing for touchdown - the tail is going to spoil the jump!
As we returned from the practice arena, otherwise known as the forest, we noticed a sad little corpse. It was not there when we set out and we could see no cause of death. 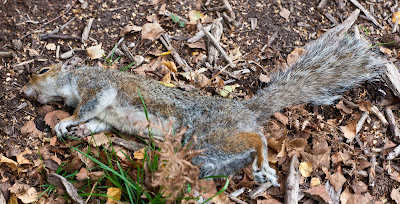 We are sure this adult had only recently met its death as the scavengers had not yet started their grisly work.
Normally we only see dead squirrels  on the roads – we have never found one in the garden and it’s rare to see a corpse in the forest. The last time we saw one was  a few years ago when Frodo was quite young. In fact, he found it and gently picked it up and brought it to me. He didn’t notice this one.
Posted by jabblog at Thursday, October 14, 2010