When the sun has shone between downpours recently there have been numbers of Large White butterflies disporting themselves around our garden. I know they're officially a pest but I enjoy seeing them as they flutter gracefully from plant to plant. The Large White is the UK's largest white butterfly. It is universally disliked by serious gardeners who usually call it the Cabbage White because of its habit of laying its clusters of eggs on cruciferous plants, particularly cabbage.
The UK has a thriving native population whose numbers are swelled each year by European migrants. With a favourable following wind these travellers can fly at 10mph - considerably faster than I can run. (Barry says that's a good Marathon speed . . . so definitely not one I could meet!) The Cabbage White is widespread across the UK even occurring as far north as the Shetland Isles.
Naturally when I tried to photograph one it refused to pose prettily. The first photo was taken two weeks ago and it's surprising that I managed to capture it at all as it was flying thither and yon. It settled for a couple of seconds on Candytuft and I took pot luck! 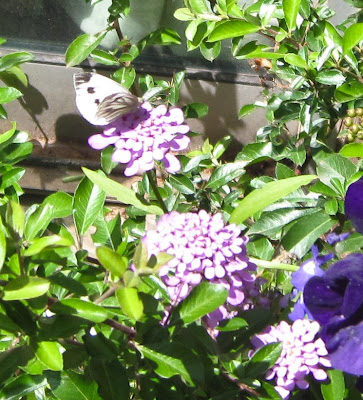 Today one settled on the plants in a hanging basket and allowed me to take several shots, all with wings closed of course! It wasn't sipping nectar as it was resting on a nasturtium leaf so perhaps it was having a quick snooze. Even blowing gently on it didn't encourage it to spread its wings . . . 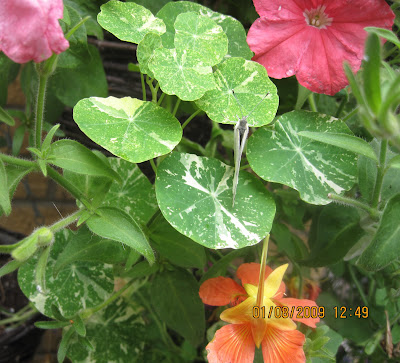 . . . which meant that I was able to take a couple of close-ups. 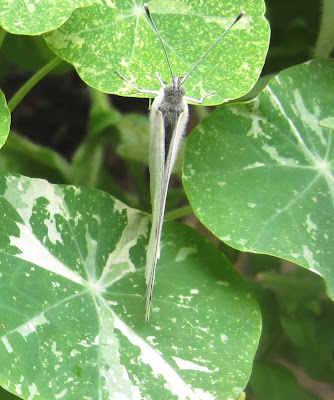 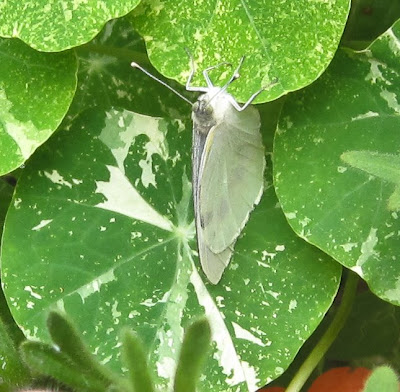 To see more Critters around the world please click here
Misty Dawn and Tammy are the hosts for this meme - thank you!
Posted by jabblog at Saturday, August 01, 2009