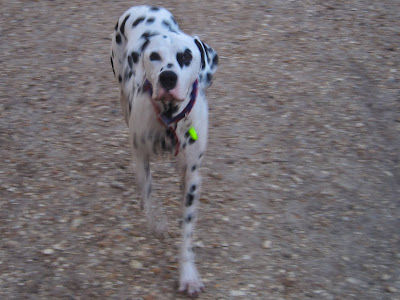 We were quite content with our two dogs, Dominie and Buddy, and were not intending to add to our pack. I had given up my full-time job and was enjoying the freedom to walk with the dogs at any time of my choosing rather than having to fit it in around work. They were well-behaved, friendly and extremely good company.

We went to lunch one Sunday with a friend of Barry's from long ago. One of the other guests was looking for a home for an adult Munsterlander. We talked about it during our ninety minute drive home and then decided that if we really wanted another dog we would prefer a Dalmatian, another running companion for Barry. After many phone calls we came across a five-month-old dog from a very well-known kennels. His breeder, Karen Goff-Leggett, had three young males and had to find a home for one of them. She had decided that Frodo would be the one but she wanted him to go to a home with other dogs, preferably Dalmatians, where he would have company and be well-exercised. We duly travelled to Lincolnshire and returned home with the piratical-looking Frodo. He was born around the time of the release of one of the 'Lord of the Rings' films and had been named accordingly. His registered kennel name is Washakie Lord of the Rings. (One of the others was called Dudley as he was born at the time of Dudley Moore's demise.)

Karen had already entered him for the Windsor Dog Show when he would be just six months old. I needed a crash course in handling for the show ring. Our first visit to Ringcraft class caused Frodo to bark at every dog that came near him – not an auspicious start. We survived the first show – in fact Frodo qualified for Cruft's which is not as great an achievement as it sounds; a puppy qualifies if it comes in the first three of a class in which it's entered in a Championship show. I entered him for several more shows but the summer of 2002 was very hot and I thought it would be unwise to subject him to extreme temperatures so didn't take him along. At our next show, a Dalmatian show, we galloped round the ring with Frodo attempting to take lumps out of the other competitors as we passed. When it was his turn to have the judge 'go over him' he growled at her – just a very soft, back-of-the-throat growl – and for me that was the deciding factor. Maybe he would have grown out of his mistrust but I felt he was not happy in the ring and so his short show career finished. In fact, he is a very reserved dog until he knows someone and then he's a friend for life. He is the same with other dogs unless they visit our house.

As it transpired the decision was a good one for he developed epilepsy just before his third birthday. It is not very severe – his seizures are short and his pre- and post-ictal behaviour are neither pronounced nor long. He has had one eleven-month seizure-free period but now the fits occur every three to five weeks.

Because of his wary attitude to strange people and dogs we worried greatly about introducing young animals. We need not have been apprehensive for he has consistently shown himself to be the gentlest of dogs with puppies and kittens (and babies) He had never met cats before he came home with us but was fascinated by the two elderly blue Burmese cats we then had, nosing and licking them. When Singleton passed on he and blind Pansy searched for her for a whole day, looking in all her usual haunts – they were both very puzzled by her absence. A year later Pansy died and once more he came to question me with his beautiful, intelligent eyes. The two Ocicats we have now are very relaxed with him, batting him with soft paws, licking him and curling up to sleep with him.

We laughingly call him the 'Velcro dog' for he sticks to me like cleavers. When out walking he rarely travels more than ten seconds without turning to see where I am. Indoors he is my constant shadow when awake. The anti-epilepsy drugs he takes cause him to sleep very heavily, like a puppy or an old dog, so that I can leave a room without him waking and following me. However, should the phone ring he's awake and howling instantly. Indeed our neighbours tell us that they always know when we're out because they hear the howling. I hasten to add this does not happen frequently – we rarely leave home without our dogs!

So, although we originally had no intention of acquiring another dog our handsome Frodo has brought much laughter into our lives as well as quite a few challenges. He is extraordinarily affectionate and very protective of his pack. I could walk anywhere with him and feel completely secure. Of all our dogs he is the most responsive returning immediately when called or whistled - the others come when they've finished their interesting sniffs, or in Jenna's case, the pursuit of deer!