An educated newt and an ambitious Mallard

Smooth or Common Newt (Lissotriton vulgaris) image courtesy of Wikimedia Commons
The independent school in which I was teaching was housed in a Victorian building that had once been a small hotel. It was warm and welcoming but not appropriate for the twentieth (soon to be twenty-first) century. The rooms were very small and the facilities minimal and it was becoming difficult to entice fee-paying parents to entrust their cif hildren to us. Eventually it relocated to a purpose-built building designed to foster every imaginable talent, though it too soon proved inadequate, requiring a separate annexe for art and science. The land on which it was erected was low-lying and close to water and nearby was a sinkhole which would take flood water in times of excessive rainfall - every fifty years or so, apparently.
The corridors were wide and spacious and carpeted in hard-wearing broad-rib cord. One day I was returning to my classroom when I noticed a little creature moving quite fast across the ridged carpet. On closer inspection I saw it was a smooth newt for which the carpet must have been like a ploughed field. I found a container and put the newt into it - my class found this very entertaining and kept asking to take off the perforated lid to see it more closely. At the end of the school day I was pleased to see that the newt was still alert and transported it carefully to my garden pond, several miles from its home territory. I felt rather guilty about this for I didn't know if I was sentencing it to a solitary life without friends and relations but over the course of the next few years I found several of these amphibians in varying stages of development.
In conversation with my next-door neighbour I told him about the newt and he said, 'I've got a newt and I call it Tiny.' I asked why and he replied, 'Because it's my newt.' (Ba-boom tish!)
(To be strictly truthful I didn't ask why until he prompted me because I was intrigued by the thought of him naming a newt - sometimes I take life too seriously!)
The school had a very successful Nursery class (kindergarten) with a small enclosed garden and playground. Children played happily and noisily there and one day the staff noticed that a Mallard duck had laid her eggs in a sheltered spot. They did a wonderful job of protecting her from the trampling feet and inquisitive fingers of three-year-olds and she hatched twelve eggs, giving cause for even more interest. Eventually the day came when she felt she must lead her brood to water. To reach this she had to leave the sanctuary of the Nursery garden, cross the large playground and negotiate her way out of it. The playground was uneven and punctuated at intervals by deep drains over which were heavy metal grids with large holes - potential death traps for tiny ducklings. I organised my class to marshal Mrs Duck and her babies safely round these hazards and although she was a little disturbed by so many humans around her she proceeded determinedly, her brood peeping as they skittered after her. I don't think she ever returned to her busy nesting spot. 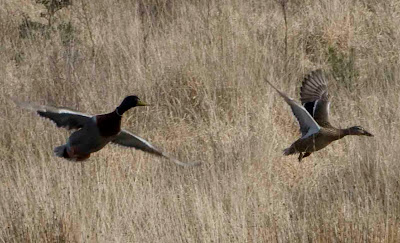 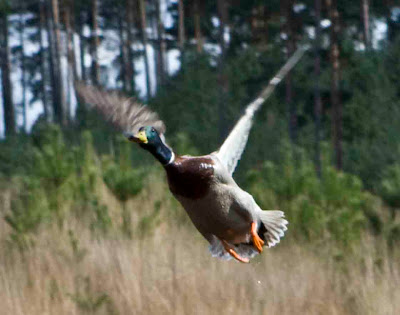 The Mallard (Anas platyrhynchos) is a dabbling duck common throughout North America, Europe, Asia, Africa and Australia. In New Zealand it is presently the most common duck species and is considered a pest because it is hybridising local related duck species. It is the ancestor of all domestic ducks apart from a few derived from the unrelated Muscovy Duck (Cairinia moschata)
Mallards are found in most wetlands including parks, ponds and rivers. A flock of Mallards is called a sord. Oftentimes two or more drakes will court a duck but there is also a high incidence - as much as 19% - of homosexual pairings.
Posted by jabblog at Thursday, August 20, 2009