Yesterday, while hanging out the washing I saw a pretty butterfly ( . . . now haven't I said all this before on another occasion??) Anyway, it seemed to be taking its ease on a windowsill so I went indoors to fetch my camera and was delighted to find it was still posing helpfully so I took a photograph - well, I would have done but I'd forgotten to replace the memory chip after downloading to my laptop :-{. Needless to say the butterfly fluttered off before I could do the necessary. Muttering to myself I continued with the chores. (What chores? Gin and tonic please. . . . tada! . . . groan) 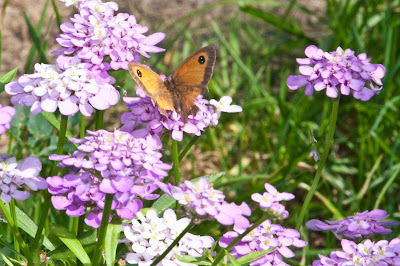 Later on, Barry was walking the estate, camera at the ready, and took photos of a very pretty butterfly supping on the Candytuft - and it was the very same one I had seen in the morning, or at least a very close relative. I had no idea what it was so referred to 'Britain's Butterflies' by David Tomlinson which is illustrated beautifully with photographs, maps and drawings by Rob Still. 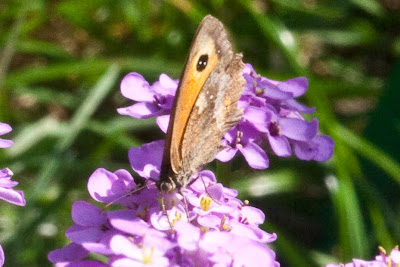 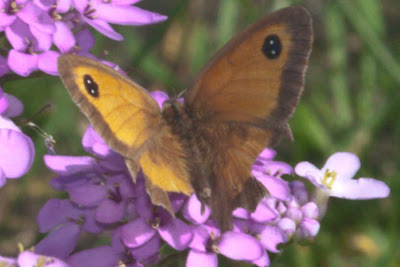 It is a Gatekeeper (Pyronia tithonus) a butterfly that is very successful in the southern half of England. In recent years it has been gradually extending its range northwards. It is sometimes called the Hedge Brown because it favours shrubs and hedgerows. It lives in colonies of variable size and doesn't stray far from its community. It likes to rest with wings outspread in the sun.
Gatekeepers start to fly in mid-July with a peak of butterflies at the beginning of August. The flight period ends with the end of the month.
This particular individual is a female, already looking a little ragged on the hind wings. Males have a dark band of scales on the forewing - this is called the 'sex brand'. Although they are common and widespread they are vulnerable to intensive agricultural practices and removal of hedgerows. 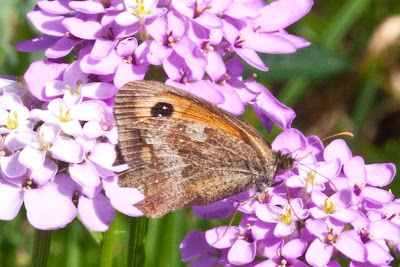 Candytuft (Iberis umbellata) is a member of the Brassicaceae family, related to mustard. The name derives from Candia, the former name of Iraklion in Crete.
Posted by jabblog at Wednesday, August 19, 2009