We were all up early today – it's like that sometimes, don'tcha know. It's been quite busy in a quiet sort of way what with Mr Human having swine flu and then a problem with his teeth yesterday. Turns out it was a dead nerve – is that what the humans mean when they say, 'He's got a nerve'? No? Oh well – he went to the dentist twice yesterday and now he's got some tablets to take – hope he don't get them mixed up with Frodo's anti-falling pills! That would be funny . . . No? 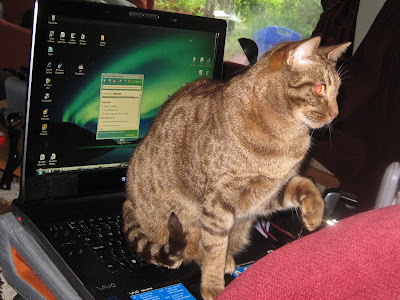 We had a laugh the other day. Monty acts so cool and laid-back and he was on the foot-stool sound asleep when he stretched and fell off. Mr and Mrs H had to pretend they weren't laughing coz us cats don't like looking silly. I laughed but it sounded like a sneeze so Monty's feelings weren't hurt. He wasn't so kind to me today – I was resting on top of some clean washing on a box and the whole lot fell down with me underneath it. (I don't know why the humans don't PUT IT AWAY.) I couldn't get out and Monty didn't help one little bit. Mrs H picked the box up and then Monty started a fight with me (they call it a rumble in Berkshire don't cha know) That wasn't very nice when I was feeling a bit fragile. Then we all had breakfast. Me and Monty had chicken wings and all the dogs had chunked beef heart. Me and Monty don't like heart much. It's not surprising really – have you ever seen a domestic cat bring down a cow? I didn't think so – our big cousins in the wild do but they'd prob'ly eat us too if they had a chance. So we have food that's kind of like the things we might kill for ourselves though Mrs H hasn't served up mice and rats and birds yet – well, only chicken. It's called' Pray model' – does that mean we have to say grace? Oh – Monty (clever claws) has just told me it's 'PREY' like what we hunt and chase. 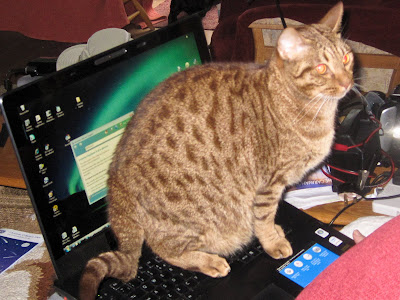 Well, he might be very clever an' all but he hardly ever goes on the laptop and he don't blog like me.Mr Mr H took some photos of me blogging this morning. Mrs H had trouble editing them to leave out the untidy bits – I don't think she did a very good job. (I don't know why the humans don't PUT THINGS AWAY.) Ooh, Mrs H didn't like me saying that. She's muttering something now about Mr H and says she'll have to blog about it. She'll have to wait till I've finished though. 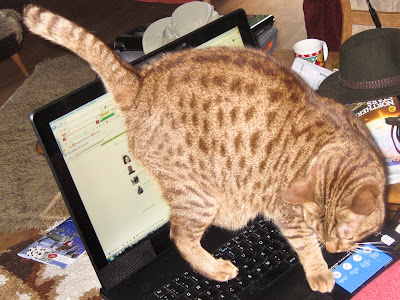 Gillian's coming later – goody – lots of cuddles and treats from the children. I s'pose that means that Tia and Foxy will be going home soon – pity, that – it's nice to have them around. 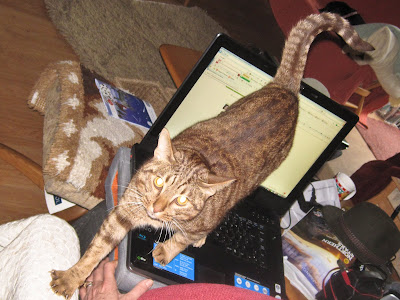