Many years ago we acquired a brown Burmese kitten and were encouraged by her breeders to mate her. Kittens are adorable and we couldn't resist keeping one - or two! We bred four or five litters from AliCat and her chocolate daughter Sweet Pea. Kittens that didn't settle in their new homes came back to us and each of our four children had a favourite so we soon found ourselves with nine cats. Alicat also made her own arrangements on a couple of occasions with a disreputable-looking Tom cat. (I do wish people would neuter their free-roaming cats!)He must have had something about him for his offspring were beautiful. AliCat's first half-Burmese were black and would have passed as Bombay cats (a planned cross between a Burmese and an American Shorthair)
The following photographs are quite old and not very good quality but I hope they give some idea of the sleek beauty of these fantastic cats. Burmese cats are talkative, responsive and extremely affectionate. 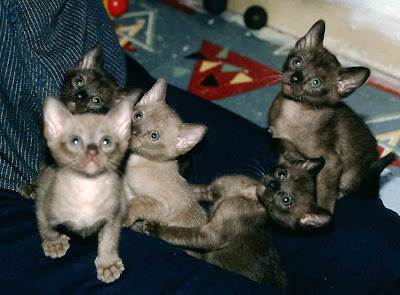 This is AliCat's first litter. There were three browns and two chocolates. We kept a brown boy, Herbert, and his chocolate sister, Sweet Pea. Their blue eyes turned yellow later. 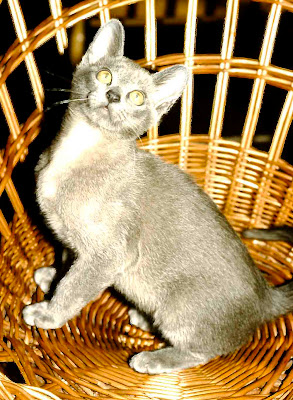 This is Pansy, a blue kitten from AliCat's second litter. She stayed with us and grew into a beautiful and affectionate companion. She had the softest eyes but went completely blind in her last year of life and her eyes lost their expressiveness. 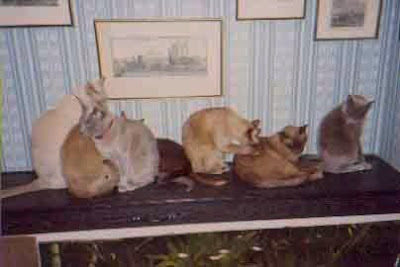 Like most cats Burmese will seek out warm spots. The top of the aquarium was a great place to hang out. Not only was it warm but there was always a slight chance of a quick snack!

Thank you to Bozo and his human for initiating and hosting this meme.