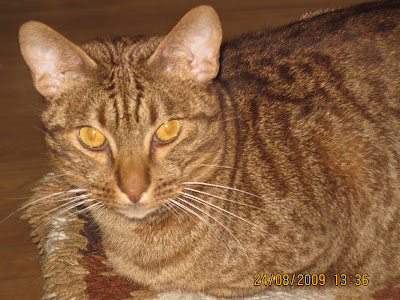 Do you like my latest portraits? Mrs Human thinks I'm putting on too much weight but Mr H says I've got a lovely tiger tummy – it swings when I walk and even faster when I run don'tcha know. Anyway Mrs H says she's putting me on a diet. Monty's got a tiger tummy too but she's not putting him on a diet. Well, she started it the other day and Gillian laughed and said I'd turned into Hunter Cat coz I was prowling around by the conservatory door while Monty ate his chicken wings. Then I went in and had mine. It's all right – I mean, I'm not starving – well, not yet, anyway. 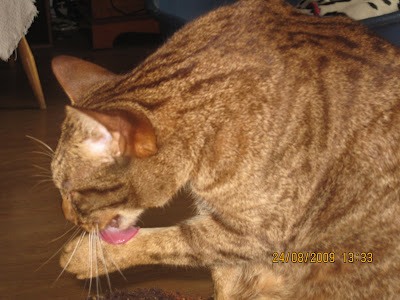 Gillian and Mrs H have been fiddling about with small bits of coloured cardboard. Someone must have broken something and they were trying to put it back together again. It takes hours to mend just a little bit. Anyway, they mended one the other day and they were quite pleased 'cept they said there was a piece missing and wasn't that a shame? Looked all right to me and it was nice and warm to sleep on.

Next thing I know Marnie's broken it again. Monty and me thought she'd get into trouble after all the time it took Gillian and Mrs H to put it together but they actually thanked her. Then Mrs H brought in another box of broken bits and they started all over again. There's a special board they put it on and it's just right for stretching my claws, then I curl up on it and watch them till I fall asleep. Monty's a bit of a pest though coz he likes to get in the box with the bits and scrabble around. Gillian's afraid he'll think it's another litter tray coz the bits make a rattling noise like our litter. Sometimes he walks all over the mended bits and pulls them up with his claws. I walk over them too but I don't break them. I only pull up the keys on Mrs H's laptop – only by mistake though.

Everyone's getting excited coz Gareth and Nina's coming at the weekend. They've been in Noo Yawk for two years in a place called Man at'em ever so high up and now they're coming home. There's goin'to be a party coz it's Kiri's birthday on Sunday – she's ever so old don'tcha know – fourteen. It's goin' to be a party for Eve too coz she was eight in July but they were busy packing up to come back so Mr and Mrs H kept her presents here. Don't know if the others are coming. I'll tell you in my next blog. 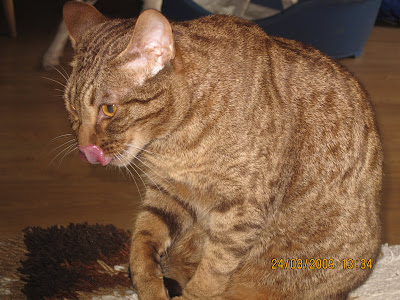