'Between our birth and death we may touch understanding,
As a moth brushes a window with its wing.'
Christopher Fry 1907 - 2005 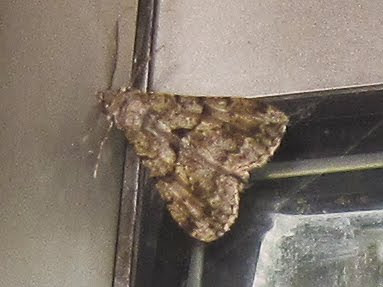 Monty and Winston were highly entertained yesterday by a moth flying near the patio door. I thought it was a nocturnal or at least a crepuscular moth as it seemed to be seeking shadows in which to settle.The flash from my camera upset it somewhat and it just wouldn't pose long enough for a decent portrait! I later discovered it flies both at dusk and by night and this is when it mates. 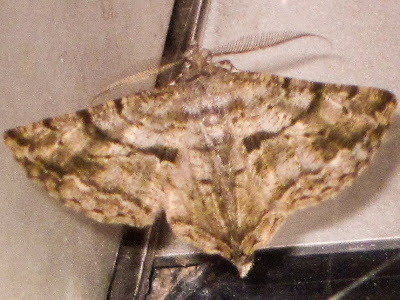 To identify it I searched in books without success and then online on the Natural History Museum website where I found 'The Cockayne collection' which displays photographs of British and Irish buterflies and moths. There really are some stunning moths with very evocative names. Eventually I think I found this particular visitor's name - Willow Beauty (Peribatodes rhomboidaria). The antennae are feathered so it is a male - the female's antennae are plain.
Willow Beauties are very common throughout England, Wales and southern Scotland in most locations, including woodland, gardens and hedgerows. The female lays her eggs singly on vines and fruit trees and may produce up to 500. The eggs hatch in the Autumn and the caterpillars start to feed for a short period before hibernating in slits in tree bark or underground. They leave their winter shelters in April to feed on buds and leaves and towards the end of May when they are fully grown they bury themselves underground, just under the surface, spin a cocoon and pupate.
The adult moths emerge from July to August.
Posted by jabblog at Wednesday, August 12, 2009