Both Winston and Monty like to see what's going on in the house. 'What are the humans up to now?' they ask each other and follow us around. 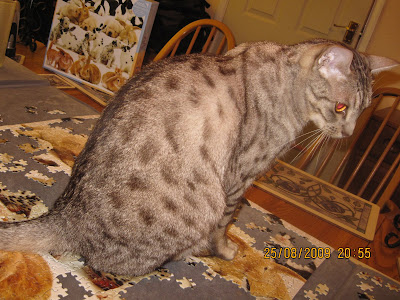 Recently, I've been doing jigsaws. Every so often I revert to childhood and while away (waste) a few hours testing my powers of observation. I like to do them without reference to the picture on the box but Gillian prefers to study the picture. As she was staying with us recently, the picture was on show.
Winston likes to jump onto the jigsaw board, stretch his claws, sharpen them and then settle down to watch and eventually sleep. Monty leaps onto the jigsaw, clambers into the box of pieces and scrabbles around then walks across the partially complete jigsaw and lifts the blocks with his claws. 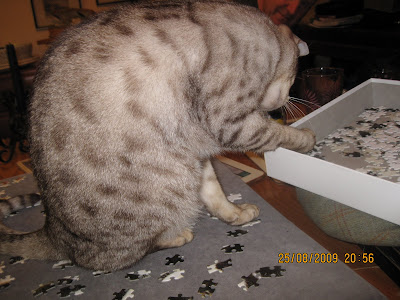 After that he decides that he can do as well as the humans so picks up the pieces in his teeth. Eventually he lies down on the jigsaw making it impossible to fit any more parts. 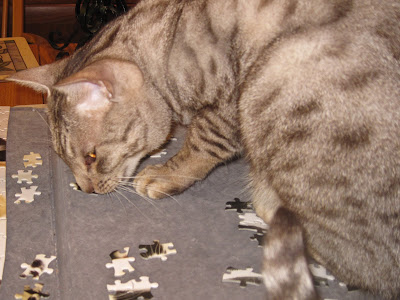 We discovered three pieces were missing as we neared completion - h'mmm . . . MONTY!!!
To see more Camera Critters or candidates for Pet Pride please click on the appropriate title.
Many thanks to Misty Dawn and Tammy for hosting Camera Critters and to Bozo and his human for hosting Pet Pride.
Posted by jabblog at Friday, August 28, 2009