Yesterday, August 31st, was the last Bank Holiday the UK

will enjoy until December 25th, Christmas Day. (Scotland's last one was on August 3rd.) Though many people consider that Autumn has arrived, naturally enough when the Autumn school term is about to start or has already commenced, in my mind at least it is still Summer. Yesterday was a warm, sunny, beautiful day and this morning dawned bright and breezy.
Spiders are usually an indication that the season is changing as they come inside in droves but they have been in residence all this year. I know they keep the bugs down and they also amuse the cats and dogs, occasionally nipping their inquisitive noses. This does not dissuade the cats from consuming them - in fact, it probably makes them more determined. The dogs merely flatten them.
I am not a fan of spiders - a fact I repeat ad nauseam - though I appreciate their role in the greater order of things, but an increasing interest in photography has encouraged me to look more closely at them. I admire the efficiency of their design and the intricacy of their webs though too long spent studying them makes me itch.
On my way into the garden this morning I noticed a reddish-brown spider on the galvanised wire mesh panel that slots into the patio door groove (we have this so that small people, dogs and cats are safely contained while fresh air is free to enter) The mesh is 2" x 2" (50mm x 50mm) and the spider was about 0.6" (10mm) and actually rather pretty though the close-ups made me reconsider that opinion. Such a tiny creature, so beautifully constructed, so busy! It seemed to be attempting to build a web, though the constant opening and closing of the patio door must have disturbed it somewhat. 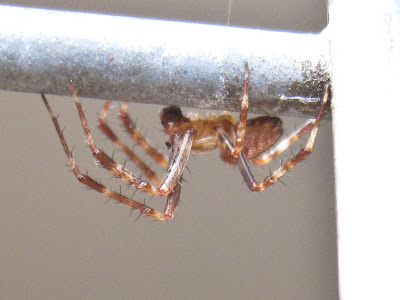 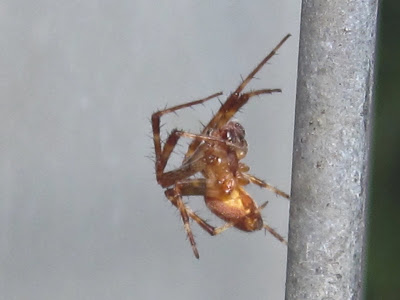 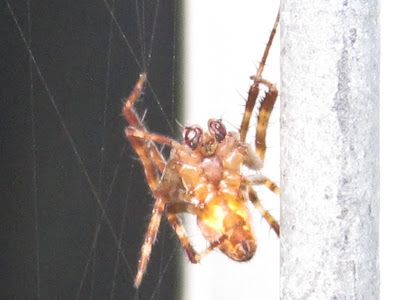 This is his underside - he looks a little embarrassed or is he simply 'hanging loose'? 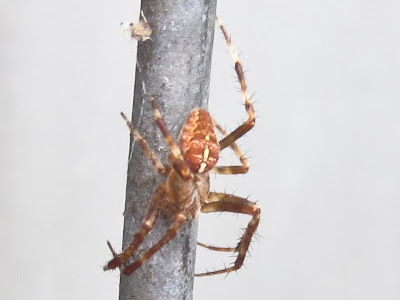 I later identified it as a male Garden spider, Araneus quadratus, which is only slightly less common than its extremely common and widespread near relation Araneus diadematus. Males are smaller than females. There are some stunning photographs here. 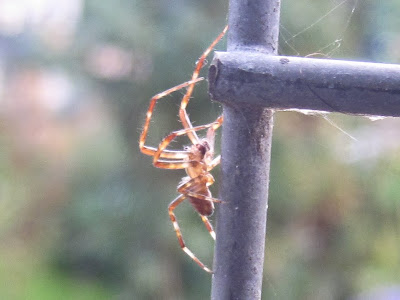 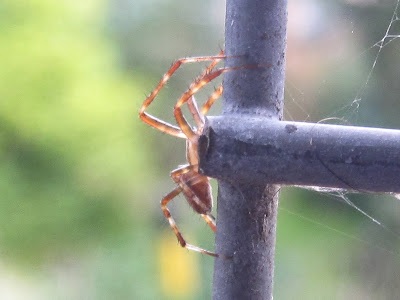 In our front garden we have two Kentish cob trees, brought to Berkshire when my parents moved here from Kent thirty years ago. They produce many cobnuts which are particularly relished by the squirrels - they have expensive tastes as cobs bought from Waitrose are currently £3.99 per kg. As squirrels are inveterate gardeners we have many saplings from the cobs and also from our corkscrew hazel, Corylus avellanus 'Contorta' - this used to be known as 'Harry Lauder's walking stick' as the singer and entertainer Harry Lauder (1870 - 1950) carried a crooked stick for every performance. 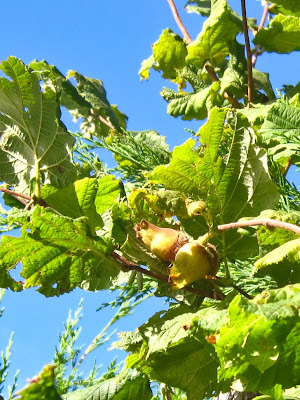 While photographing the cobs I noticed, as I do every year, and marvelled at the tight little catkins that will herald Spring in a few months' time, dancing in the breeze before the leaves unfurl. To paraphrase Shelley, 'If Autumn comes, can Spring be far behind? 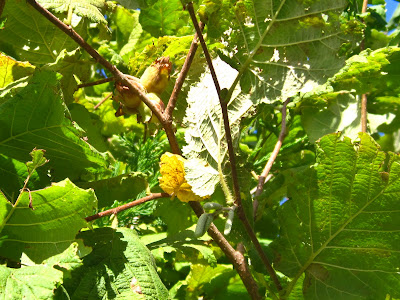 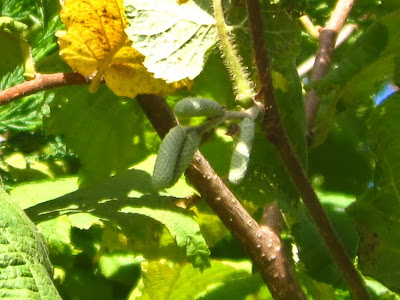 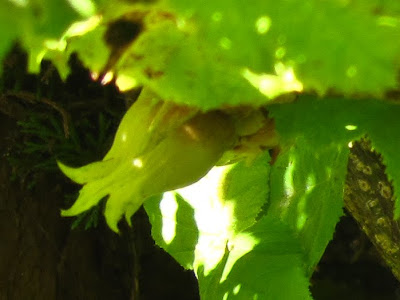 Meanwhile the day that started so promisingly has commenced its downturn - the wind is strengthening, the temperature is dropping, splendid clouds have massed and are now emptying their contents vigorously on our sodden ground.
Posted by jabblog at Tuesday, September 01, 2009