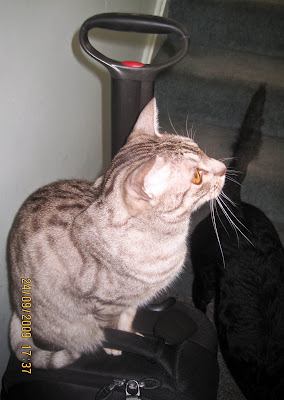 Recently, courtesy of chick-lit (thank you, Catherine Alliott) I discovered the term 'rig'. It describes a castrated male (we're talking domestic animals here!) which retains some sexual interest – hormonal maybe? This means that the affected animal still has interest but not equipment to indulge in reproductive acts (oh, okay, SEX!) Strictly speaking it refers to an incompletely castrated male in livestock species (horse and cattle)


I think Monty Ocicat may be a feline rig. Last night I hauled him off Winston because he had taken him by the scruff of the neck – as all members of the cat family do (don't you remember those natural history programmes you watched with your family and the difficulties provoked by multi-generational viewing when something explicit was aired? Oh, where to look? Control your breathing – you're watching something entirely normal. Why are your parents clearing their throats so much and brightly suggesting a cup of tea might be nice?)

To continue, having grabbed Winston's neck, Monty mounted him and went through the pantomime of attempting to mate him, padding his back feet and keeping tight hold of his scruff. Not unnaturally, Winston objected strongly to this. Sometimes when Monty misbehaves he is given 'time out' in the conservatory, but on this occasion he was allowed to remain in company.


There are occasions when Winston tries things that Monty doesn't care for. He attempts to suckle from Monty who happens to be the same colour as Winston's mother. Our chocolate Burmese, Clown, often tried the same thing with his lilac brother Angus and well into maturity buttheir mother was brown! Monty tolerates the attention for a considerable time but once the teeth come into play as well as the kneading paws he administers a sharp rebuke and is left in peace.

I think Monty is tolerant because he is partial to kneading when curled up with Jenna-the-Labrador. He doesn't go as far as trying to suckle from her but his rapturous, increasingly loud purrs accompany ever more insistent padding until even Jenna's thick fur can no longer cushion the pain of his needle-sharp claws. She growls at him and he desists but remains at the side of his favourite dog.
Posted by jabblog at Tuesday, September 29, 2009