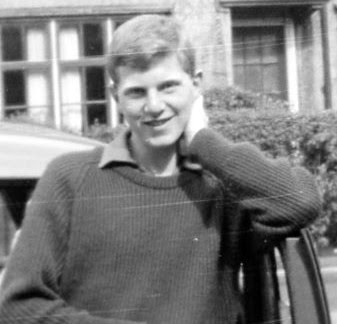 Barry has always had a lively inquiring mind and a need to test theories for himself. When he was around 15 years old, he became interested in creating rockets. Acquiring the components was simple enough and he entertained himself trying different ‘recipes’, concoctions he discovered in the Public Library. All fuses were ‘Jetex’.
A by-product of the rockets was explosions. On one occasion while testing the latest prototype in the back garden the rocket flew off at speed into the next-door neighbour’s cabbage patch, destroying it.
A far more serious event happened at school when the rocket propellant Barry was trialling badly scorched and blew a hole in the cricket pitch. The experiment had been conducted at night and he had selected a test site in the middle of the sports field as far as possible from habitation. Not being a cricketer he was unaware that the chosen location was destined to be the coming season’s cricket pitch. (Bear in mind that this was in Kent, one of the eighteen first class cricket counties in all of which cricketing is taken very seriously. Kent, together with Sussex, is the birthplace of the sport. It is believed that cricket was invented by children living in the Weald in Saxon or Norman times.) The grounds man was very unhappy the following morning, muttering that the last time this happened was during WW2 when a German aircraft bombed the place.
A search for explosive substances revealed that Barry’s locker was a veritable jet propulsion lab. Unaware of the fracas he had caused, Barry was ordered to report to the headmaster’s study where he was presented with the evidence of the locker and the cricket pitch. He feared uncomfortable retribution. The head, a former Colonel during the Second World War and a Quaker, took a most enlightened view and, though he left no doubt in Barry’s mind that his activities had been noted and disapproved of and were not to be repeated, informed Barry that his punishment would last for two terms; he was ordered to report to the chemistry master and attend compulsory after-school lessons on explosives. He concluded, 'If you are going to do this sort of thing then you will do it properly and under supervision and ONLY under supervision.' It transpired that the chemistry master had been in the SOE (Special Operations Executive) during WW2 and knew a thing or two about 'doing it properly' as far as explosives were concerned. Barry learnt much and effected his future 'experiments' under the guidance of his ex-SOE mentor.
Eventually other interests developed and rocket-making became a thing of the past. Many years later, Barry was sitting with a very senior member of the armed forces waiting for a meeting to start. They were of a similar age and started reminiscing about school days and it emerged that he also had carried out similar 'experiments' in his youth. The difference was that he wasn’t caught.
Postscript: Barry recalls these events with some horror - but it was not at all uncommon for schoolboys to engage in dangerous activities. Even schoolgirls in Chemistry laboratories could be observed mixing various chemicals 'to see what would happen.' Nothing ever did (in my school anyway) but we were poorly supervised in the days before 'Health and Safety' ruled.
Posted by jabblog at Thursday, September 17, 2009