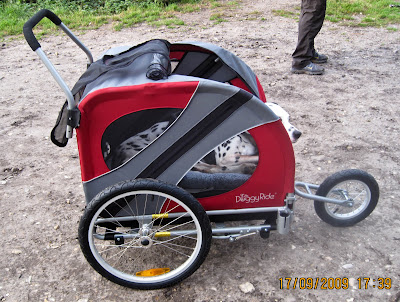 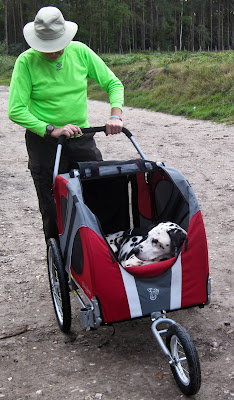 Gentle Dominie has made us think very hard recently. She cannot get up on her own but can walk short distances once she is on her feet. We keep questioning each other about her quality of life, wondering if we're doing the right thing for her. She is old but not like other old dogs we have had for she is very alert and welcomes all comers to the house with her usual warble. She notices what is happening around her and gets upset when the other dogs go out and she has to remain behind, albeit with a human in attendance. She enjoys being a part of what is going on, particularly if it involves food. Her appetite is very good and she is ever ready for refreshments. She vocalises her needs and waits patiently until the dumb humans in her family interpret her needs correctly. Many would say that she should be euthanised but that would not be fair to her because, in short, though her back legs don't work the rest of her is in fine condition. Thus we always reach the same conclusion - she is not yet ready to travel on.

Dominie has been 'wearing' hind wheels to compensate for the lack of messaging to the atrophied muscles in her back legs when we go out but recently has been overbalancing and cannot really manage on them any longer. To support her on a walk of longer than ten or fifteen minutes is hard work, pulling human neck and back muscles; it is also probably not very comfortable for her as the harness straps pull tight on her but she enjoys the stimulus of change of scenery, fresh air, new people or dogs who come up to make friends.
Therefore we have bought a dog trailer. It's called 'DoggyRide' . Designed in Holland, it resembles a baby buggy and can be pushed or it can be attached to a bicycle and towed. Dominie had her first outing in it yesterday. We made sure it was well padded and set off up the hill. At first she looked rather uncertain about it but enjoyed it when a couple of cyclists stopped to say hello and make a fuss of her. After that she was squeaking and we wondered if she wanted to turn over. In fact, she wanted to relieve herself. Then, with support, she walked to the pond and drank from it, paddling her front legs in it. While Jenna-the-Labrador chased after her ball and Buddy Liver Spots and Frodo the Faller stooged around, Dominie lay and watched, snuffing the air. A few minutes later she walked on for a short while and then was happy to go back into the buggy. It was an enjoyable outing for us all and Barry and I agreed that it was a worthwhile investment for even if Dominie doesn't get extended use it will surely serve the other dogs in due course.
Posted by jabblog at Friday, September 18, 2009