Postscript to 'I live to launder' March 2009 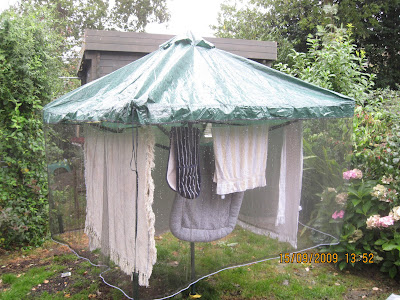 One of the 'joys' of laundering is drying items in the fresh air. The trouble with living on a relatively small island (or collection of islands) is that the weather can and freqently does change rapidly bringing several varieties in the course of one day. Thus hanging out the laundry is chancy particularly if I intend to go out for the day - or even for an hour or two. Telling myself that soft rain will rinse the washing again isn't really very helpful especially if said rain drops relentlessly for hour upon hour.


I think I now have the answer. It is a rotary dryer, sometimes referred to by me as a whirligig, otherwise as a carousel, bringing to mind prancing fairground horses - now wouldn't that make a necessary chore more fun? Would I sit on each bright steed in turn, pegging clothes to ears and reins, stretching sheets and towels across the saddle pommels of the nags next to me and going UP and DOWN and UP and DOWN and ROUND and ROUND and ROUND and ROUND to the unmistakeably cheery sound of a fairground organ. Now that I think about it the flying chairs - Chair-O-Planes - could be brought into play. Think how quickly the washing would dry on those! Swing Boats would be all right for hand-held things - tea towels and dish cloths perhaps - hold on with one hand and flap the washing with the other? I don't think the Big Wheel would be much use, except at the immediate approach and departure of the zenith and at the zenith itself and the Helter-Skelter would barely have begun its work before the bottom was reached. Shooting Galleries and Lucky Dips wouldn't afford any help though perhaps the Bumper Cars might be called into action. The drawback with those would be the soiling that might occur as cars battered into each other! I remember my brother received a nasty cut to the eyebrow on a Bumper Car - blood everywhere and a lifelong scar! The Tea Cups might be useful for small light items - not enough height or space for larger things.
I digress - the rotary dryer we erected yesterday requires an extension pole as it appears to be designed for the (much) shorter woman but we purchased a rainproof cover with mesh skirts so that the washing can remain out in even the most inclement weather - apart from a howling gale, of course. (There's a boat at our marina called 'Owl in Gale'!)
This YouTube clip made me giggle - I'd like to see the house that has a garden like this!
http://www.youtube.com/watch?v=Mn0s9kTg2FM
Near the top of the instruction leaflet accompanying the DRYLINE is the advice - 'AVOID FITTING IN HIGH WIND'. Visions spring to mind of a Mary Poppins-style sailing up into the ether. Its efficacy is being tested today as drizzle is falling determinedly and the sky is grey. Wet weather gear will be required for walking the dogs. Barry chose the one dry spell to cycle with them earlier (and met a lady 'dog-scootering' of which more anon.)
Postscript: it is now definitely raining - no more of the wishy-washy precipitation that fools you into thinking you're not getting wet - this is the real, heavy-dropping stuff.
Posted by jabblog at Monday, September 14, 2009