It's been a busy week so far and it's only Wednesday!

I arranged for the chimney sweep to come on Monday. We have two multi-fuel burners, one in our sitting room and a smaller one in the conservatory. Originally, the new conservatory roof was scheduled for installation a week ago but it was delayed. It was not a problem – the conservatory had been cleared out so the sweep had plenty of elbow room but when he started on the sitting room fire he found a snag. We knew that the chimney was only partially lined because the stove installers had not been able to fit the liner round the dog-leg bend. This had not troubled the sweep who came last year but Monday's man wanted to do a thorough job. His opinion was that the chimney was very dirty and if left the soot would fall outside the partial liner, building up over the years and impossible to reach. His solution was to disconnect the burner from the flue and move it to one side to gain access to the chimney. It's a cast iron stove and very heavy but between us we managed to move it – though to be honest I don't think I added much power to the enterprise.

While the sweep was engaged in his work a man from the gas board came to replace the meter. He inquired what gas appliances we used and I told him it was just the hot water boiler in the garage and the kitchen range. Then he asked if he could have a quick look at the boiler. I said, 'You're welcome to try – it's a bit hugger-mugger in there.' He took one look and we decided he should go in through the vehicle entrance. It was still pretty chocker but after we had moved a few things he was able to gain access. 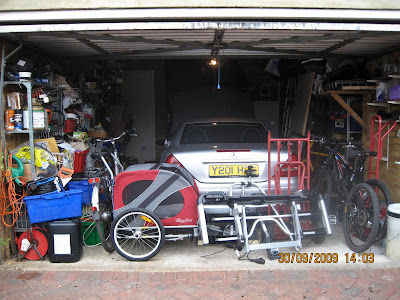 Every time we have to find somewhere to store something and Barry says, 'It can go in the garage' my heart sinks. At the last count I think he had four sack-barrows each designed for a specific purpose. I don't often use my car - just as well really! The gas boiler is in the far right corner to the right of the overflow freezer, which is not connected most of the time. It cannot be seen from the door. The door into the house is on the far left.
He checked the boiler and then proceeded to drill a hole in the porch wall where the meter is housed. So now the chimney sweep's vacuum cleaner was going full blast and a loud drill was rattling the house. The cats were very unsettled, their eyes huge, and the dogs were restless and barking from time to time. Many 'cold callers' decided to contact me so I also took several phone calls which caused Frodo to howl – the pitch of the telephone's warbling tone hurts his ears.
When the sweep had completed his cleaning he manhandled the stove back into position but before he did so he noticed the remote control motor receiver box but couldn't see how it worked or where it fitted. I didn't know either so told him not to worry about it because Barry would sort it out when he got home. That was a mistake! It took much fiddling about, not a little cursing and many deep sighs were heaved. It would have been much easier to fit the magnet which retains the motor before the stove was moved back but Barry wasn't at home so it couldn't be. Eventually it was accomplished and calm was restored. 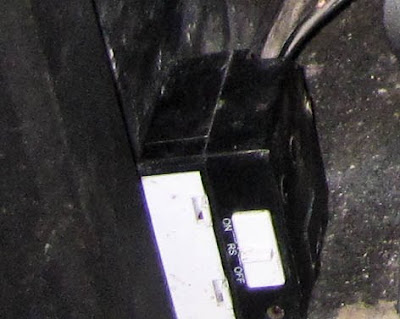 This is the remote control motor receiver, cause of frayed nerves! It controls the damper.
At 8:00 am on Tuesday morning the roof installers arrived to start work. It was a very noisy day and the cats were miffed because they weren't allowed in the conservatory. Buddy was upset too as he likes to lie in the doorway between conservatory and kitchen and keep an eye on proceedings. The old roof was dismantled and removed and the framework for the new one installed. It's steeper than the original and some of the brickwork has been exposed and will have to be plastered. When the men left yesterday the roof was open to the elements and I wasn't happy about that even though rain wasn't forecast.
Fortunately we had a dry night. 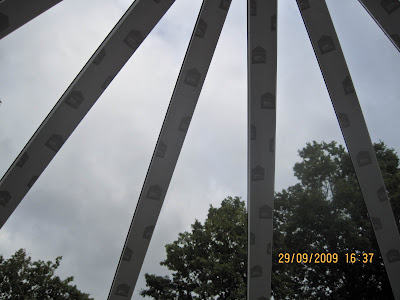 Doesn't the sky look clear? It should - there's no glass!
The workmen returned bright and early today to fit the glass, only to discover that one of the panes was the wrong size! 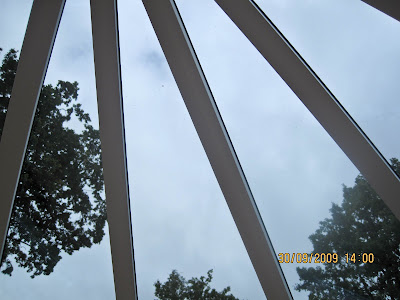 The glass is blue K glass. It is self-cleaning, heat reflecting and insulating. It looks very attractive and we are looking forward to star-gazing as the nights draw in further.
We currently have a glass roof with two polycarbonate panels, through one of which the flue should pass. It looks rather strange but should only remain like that for about ten days. The flue panel has to be specially cut. 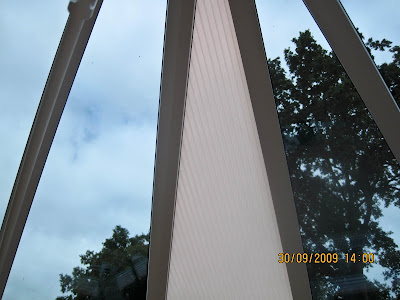 The polycarbonate spoils the overall effect but shows what a difference the glass has made.
The men also found that the fitting brackets for part of the guttering were missing. Why are jobs never straightforward?
We're going to redecorate before we put everything back in the conservatory. It's a good thing we're not desperate to use the dining room! 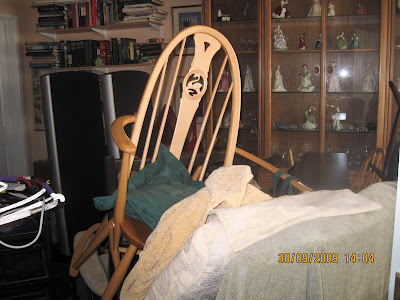 We have too many chairs most of the time but need 15/16 when everyone's gathered together.
All the conservatory furniture is in here plus two enormous Quad speakers (Barry lusted after them for years) and the associated hi-fi. 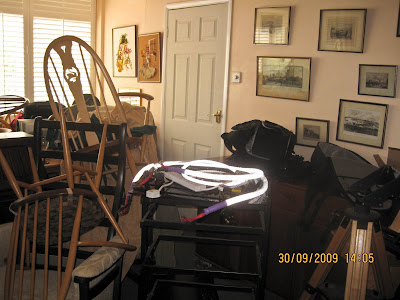 At the window end of the room Gareth and Nina have stacked many of their personal belongings that need to be kept securely until they are back in their own home in October.
Posted by jabblog at Wednesday, September 30, 2009