I'm sure you've all heard the expression 'Poor little mite' . It's one that I shall never use again advisedly from now on!

A week ago today (Tuesday) all the dogs seemed to be taking it in turns to lick the side of Jenna's face. We all looked and could feel that there was what appeared to be a lump. We investigated and found what seemed to be a slightly infected cut so Barry and our eldest granddaughter Marnie took Jenna to the vet. Mark-the-Vet discovered that the cut had been caused by scratching because she had ear mites. We hadn't noticed any excessive scratching but the evidence was undeniable.

Ear mites are very contagious which meant that the rest of the animals had to be seen. We have had six dogs in our house for the last three and a half weeks as Gillian's two were visiting so they all had to be transported to the vet and taken in two by two on a sort of rolling programme – one being examined while one waited. It was quite a pantomime circus and very entertaining for the other clients! The result was that two of ours needed treatment - Jenna and her half-brother Gus (who was heavily infested) as well as Tia, one of Gillian's dogs. Buddy's ears were grubby so he had to have drops and Frodo and Foxy were clear. The next morning Winston and Monty had to be seen but they were completely clear.

I learnt something new. It seems that puppies are often infested with ear mites! I knew about intestinal worms but I'd never heard or read of ear mites being a problem in puppies. So Gus is probably undoubtedly the culprit.

So the morning routine is now:- anti-epileptic drugs for Frodo, MSM and Glucosamine and other vitamins for Frodo, Buddy and Jenna, antibiotics for Jenna, ear drops for Jenna and Gus, cleansing ear drops for Buddy (which he hates – he shakes and we all get a shower, but it smells quite pleasant . . . ), eye drops for Buddy. Tia and Foxy have gone home with their family now so they're out of the equation . . . which brings me to Monty. 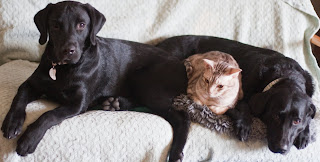 Monty adores dogs, particularly black dogs. He was born into an Army doctor's home and  among other breeds (including a Japanese Bobtail!!!) she had a black GiantSchnauzer who gently ambled amongst the cats and kittens. Monty loves all the dogs!  Here he is between Gus  (7 months) and Jenna (4 years)
Monty and Winston were declared mite-free for which we were thankful. Monty had been quiet and had had little appetite for a couple of days and we were keeping an eye on him. Throughout Sunday his breathing became very laboured and we decided we needed an emergency appointment for him. My thoughts were initially that he had a respiratory infection but it also crossed my mind that he might have a problem with his heart. It transpired that my second fear was the correct one and he is currently still with the vets who are doing a fine balancing act to restore him to health. Mark-the-Vet phones twice daily (sometimes more) to let us know how he is progressing but it looks as if he will remain with them for another day or two at least as he is on an intravenous drip. Then his medications will join the rest in the 'animal medicine cupboard' and my morning and evening rounds will be longer.

Marnie and Callum went to visit him today and he was very responsive, purring and rubbing his head against them. We didn't go because we thought it might distress him but as their visit was rewarding perhaps we will go tomorrow. We are not pessimists but we do try to be realistic. Our vets are the best and Monty is young – only three years old - but his heart is not in good order, thus we hope for a good outcome but fear the worst. He's a fighter though, nearly dying from osteomyelitis as a three-month-old kitten.
It's difficult, indeed, doing everyday tasks with all fingers crossed!
Thank you to Denise Nesbitt and her ABC Wednesday team for their hard work in organising and hosting this meme. You can find out more – and join in! – here!
Posted by jabblog at Tuesday, April 13, 2010