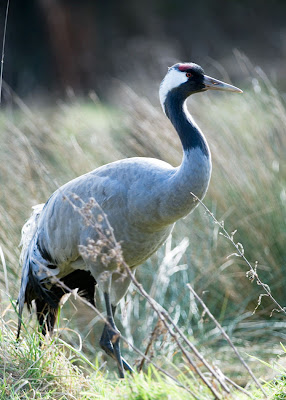 Photo copyright Mike Powles
A news item on television this morning reported the successful hatching of Eurasian or Common Crane (Grus grus) eggs at the Wildfowl and Wetlands Trust in Slimbridge, Gloucestershire. The eggs were imported from Germany to be incubated. As each chick hatches it will be fed somewhat remotely with a special device in order that it does not become imprinted on its carers. It has been suggested that the chicks will be released into the wild, in the Somerset Levels, once they are capable of living independently. The Somerset Levels were once a stronghold for them.There is a long history of cranes in Britain. They appeared on illustrated manuscripts and in 1251 were on Henry III's Christmas menu. They became extinct in UK in the 17th century probably due to hunting and the destruction of their habitats. They were still spotted as rare migrants and winter visitors in the following centuries. 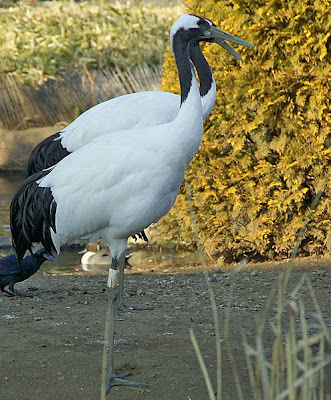 Image courtesy of Wikimedia Commons
About 30 years ago a pair of cranes arrived in Norfolk and remained for a year, sheltering in the reedbeds of the Broads. From 1981 they began to breed and there is now a growing number of resident breeding pairs in that county and in the Suffolk Fens. The winter sees an increase in numbers when about forty non-breeding birds arrive for the season. 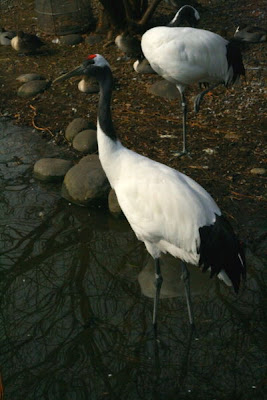 Image courtesy of Wikimedia Commons
In Asia these stunning birds are considered to be ambassadors for peace and safety. They are long-lived with a lifespan from 40 to 60 years though one male was recorded as breeding successfully at 78 and dying five years later. They breed in and around pools in thick vegetation and feed on leaves and seeds and small invertebrates living in shallow water and wet ground.

My mother embroidered these panels more than thirty years ago.
Posted by jabblog at Wednesday, April 28, 2010