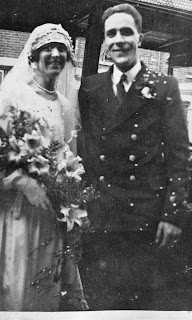 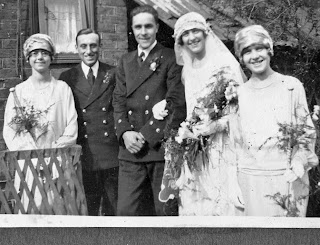 They look happy and relaxed in these photographs but my mother told me she cried all the way through the marriage ceremony! The tears had dried by the time the camera was brought out. Her mother had wanted to have church bells ringing but it was Lent so the bells remained silent until Easter Day.

When I was about eight years old I announced at a gathering of my parents' friends, 'My parents were married on 16th April and I was born two days later.' This caused some mirth, particularly as I was the youngest of their three children. They had been married for 61 years and had set a fine example for us by the time my father died but they were quite unusual in their philosophy. In an era when marriages were considered to be binding, no matter how difficult circumstances might become, they agreed right at the beginning of their life together that should it prove impossible to maintain their relationship they would divorce. Divorced couples were often shunned by former friends but my parents continued their friendship and support for those few who could no longer live together. I think they were very conscious of the compromises and effort required to share life and, though they must have had their differences, we were never aware of conflict or disagreement. They were quiet, determined, strong-minded and much later, after I was married, I realised how much they were to each other.Eighty-three years ago the sun shone on their wedding day. Today it shines again. I think of them often, singly and together. Impossible though it is, I wish I could have known them as young adults – I think they were a lot of fun!