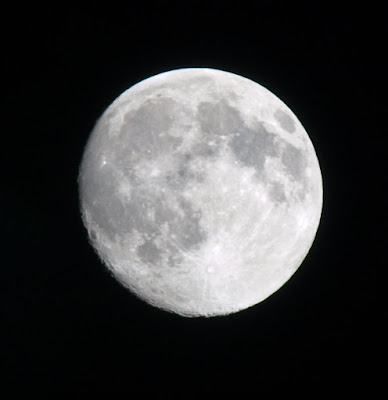 The Moon and Stars
The stars about the lovely moon
Fade back and vanish very soon,
When, round and full, her silver face
Swims into sight, and lights all space.
Sappho (c.610 – 570 B.C.)
Translated by Edwin Arnold, 1869
Last night the moon was full though we didn't see it. I'm not sure whether the sky was cloudy or clear but I was busy proofreading and had no time to gaze at the skies. The full moon photograph is from November 2008 – wrong month, wrong year, but quite as lovely.
The full moon in April is called the Grass Moon, the Egg Moon or the Planter's Moon. I'm sure it has other names too but each of these seems appropriate in its way. The lawnmowers begin to call in April as the grass grows and the garden-proud start their battle against the untidiness and profligacy of Mother Nature.
April is the month in which many birds are laying and brooding eggs so Egg Moon is a very apt name. From now until after the eggs have hatched and the surviving young have gained independence, parent birds are run ragged – almost literally, as the bright breeding colours fade and the feathers become less pristine, more tattered. Feeding and water stations in the garden are important sources of sustenance though they also attract Sparrowhawks – but they, too, have young to feed.
Planter's Moon is an apposite name for at this time of year seeds are planted, seedlings are potted on, cuttings are taken from suitable candidates for propagation. Growth in the garden is still young and fresh but everyone knows how rampant Nature becomes in a very short while and the dedicated try to steal a march and curb her unbridled passion – all in vain, of course!

Additionally, I think April's full moon might be called the Barbecue Moon as the first glint of sunshine bringing a slight hint of warmth causes the barbecues to come out of hibernation. They are envious of the beautifully scented flowers and seek to overcome their perfume with smells of smoke and burning flesh. Occasionally the flesh is intended to be eaten! This is the time of year when the male of the human species can be spotted wielding lumps of meat and showing off his expertise in camp cooking. There's something about a barbecue that causes distant tribal memories of being hunter gatherers and any man, of whatever age or stature, is immediately transformed into a warrior, the protector of his woman and children.
It's Bank Holiday weekend in UK starting tomorrow and the weather is already performing its usual routine. The temperature is set to drop about 10˚ and rain is forecast. On Tuesday, doubtless the temperature will rise once more and the sun will shine brilliantly to mock the workers returning to their toil.

The man in the moon
Came down too soon,
And asked his way to Norwich;
He went by the south,
And burnt his month
With supping cold plum porridge.
Traditional nursery rhyme
This rhyme was common in the 19th century though it probably dates from an earlier time.
Posted by jabblog at Thursday, April 29, 2010