ABC Wednesday N is for Noses 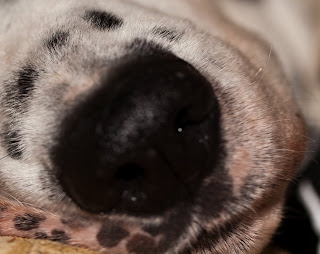 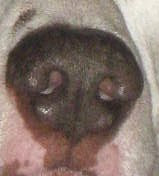 Buddy
Buddy Liver Spots is quite deaf and almost blind and relies on his nose to find his way around. To hear him snuffing about in the wee small hours one might imagine a steam engine approaching! 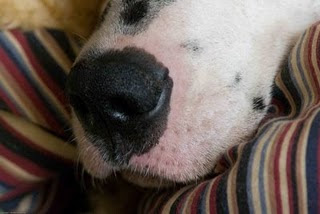 Frodo
His sense of smell is a dog's most sophisticated sense and a large part of the canine brain is dedicated to interpreting scent. A human nose has 5 million olfactory cells. An average canine nose has over 200 million receptors. The canine sense of smell is thought conservatively to be 50 to 100 times better than a human's. Some have suggested it may be as much as 1000 times better. Scientists explain this by saying that human scent cells may cover about one square inch while a dog's scent cells can cover 60 square inches. 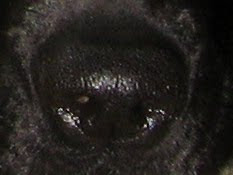 Jenna
Dogs can pick up some odours in concentrations of one part per trillion. Bloodhounds have 300 million olfactory cells in their noses and it is a matter of record that one bloodhound followed a scent trail for 114 miles. 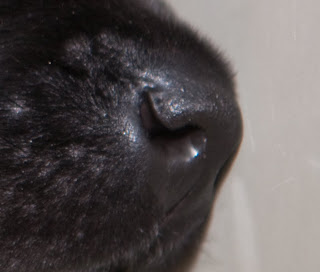 Gus
Even when fast asleep a dog can be brought to sudden wakefulness within seconds through the careful placement of food near its nose.Humans have exploited this remarkable sense, training dogs to discover drugs, detect guns and explosives, find bodies in collapsed buildings, rescue people lost on moors or mountains. Some dogs have been trained to alert their owners to the onset of heart attack, migraine, epileptic seizure, diabetic imbalance, often as much as 30 minutes before onset. It is thought that a change in metabolism or body chemistry generates a different smell detectable to the dog. Studies are currently being conducted to test the dog's ability to detect cancer cells.
Cats' noses are also very sensitive.

Monty
A cat's sense of smell is fourteen times greater than a human's. A cat that loses its sense of smell will not be able to function effectively. If an outdoor cat it will be unable to hunt, as it depends on smell more than any other sense to find prey. If it cannot smell even an indoor cat will not eat – cats always sniff their food thoroughly before eating. 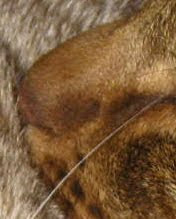 Winston
The vomeronasal organ (Jacobson's Organ) is functional in both dogs and cats and allows a greater intensity of smell. It is found just behind the upper front teeth and connects directly with the nasal cavity. Cats can often be seen demonstrating the Flehman Response, when, stimulated by a scent, they will open their mouths to enable the vomeronasal organ to open the ducts to the nasal cavity. Some people describe this as a smile, though I have always thought of it more as a sneer!
Thank you to Denise Nesbitt and her team for their efforts in organising and hosting this meme. Find more Ns here and add your own, if you will.
Posted by jabblog at Tuesday, April 20, 2010