ABC Wednesday T is for Thomas the Tank Engine


When Christopher Awdry was ill with measles in 1943, his father, the Reverend W. Awdry, created the original characters and stories in a series that would bring him fame. Wilbert Vere Awdry (1911 – 1997) was an English clergyman, a railway enthusiast and finally a children's author. He was active in railway preservation and built model railways which he exhibited at various venues around the country.
'The Three Railway Engines' was the first book in 'The Railway Series' but because of the war (WWII) it was not published until 1945. It introduced Edward the Blue Engine, Henry the Green Engine, Gordon the Big Engine and the Fat Director, Sir Topham Hatt, whose title was later changed to the Fat Controller after the railways were nationalised. 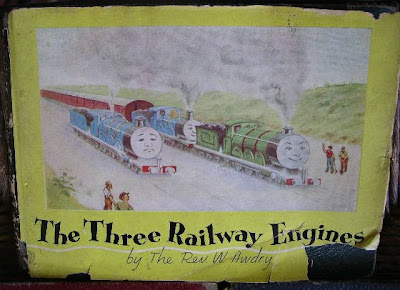 The illustrations for the first edition were by William Middleton but Rev. Awdry thought them lacking fine detail and too much like toys. 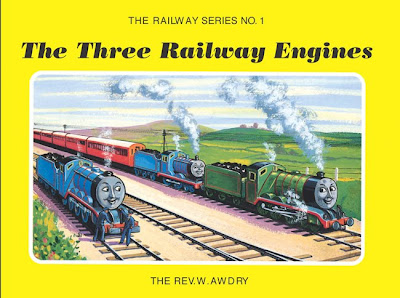 Subsequent editions were reillustrated by C. Reginald Dalby.
Both images courtesy of Wikia
Thomas made his first appearance in 1946 in 'Thomas the Tank Engine.' He was a tank locomotive or tank engine – a steam locomotive carrying his own fuel and water instead of pulling a tender containing them. Tank locomotives evolved around 1840 and were used for shunting and short distance tasks.
In 'Thomas and Gordon' Thomas was described as 'a fussy little engine, always pulling coaches about . . . He was a cheeky little engine, too.' The little blue locomotive dreamt of more glamorous tasks and eventually, after rescuing James, he was given his own branch line.
Thomas gained enormous recognition through the UK television series and spawned a variety of merchandise. He was easily the most popular of the engines among children. Rev. Awdry wrote twenty-six of the books in 'The Railway Series' books and his son, Christopher, wrote the last fifteen.
The YouTube clip shows the opening sequence from the television series.


Thank you to Denise Nesbitt and her Tried and Trusted Team whose members organise and host this weekly meme. To see more Ts please click here.
Posted by jabblog at Tuesday, June 01, 2010