Buddy keeps us on our toes!


It was a lovely day on Wednesday. Barry had gone to a formal lunch in London so I took the dogs out on my own. We didn't meet a soul and it was good to feel that we had the forest to ourselves. Jenna and Gus played in and around the ponds and Frodo went in for a refreshing bath. Buddy was sniffing interesting sniffs and happily wagging his tail as we walked along in the sunshine. There was a pleasant breeze to complement the bright sun, the birds were singing and all was well with the world. It felt good to be alive.
When we reached home the dogs flopped down to snooze. After a while Buddy got up and went to the patio door, asking to go out. He started pacing restlessly then began coughing and frothing at the mouth. My first thought was that he had something stuck in his throat though he'd had nothing to eat since breakfast several hours before and I knew he hadn't picked up anything during our walk. He became ever more agitated, stumbling almost into the pond, and I looked in his mouth to see if anything was there. At the same time I noticed that his stomach was bloating and becoming very tight and hard. Within minutes I got him to the vets' surgery – fortunately, it's only two minutes away by car – and managed to help him out of the car. By now he was extremely distressed and I was very relieved when a nurse came after a minute or two to take him through to the treatment area.

When Mark-the-Vet came back to talk to me he looked grave. Buddy was in a bad way. If he was suffering from gastric dilatation a tube could be passed down his throat to relieve the build-up of gas, it would be clear that the stomach had not twisted and he would instantly feel much better. If the tube could not be passed other measures could be taken to release the gas and reduce the pressure, namely inserting a needle or catheter into his stomach from outside. An x-ray would help to determine the state of Buddy's insides. Ultimately, an operation might be required but it was not a procedure to be undertaken lightly in view of Buddy's age – he's fourteen and nearly died three years ago from meningitis. I had to sign a consent form for anaesthesia but could hardly write because my hand was shaking so much. I may always look calm and collected but under the surface everything's racing! I went home to await further information.

As I walked into the house my ears were assailed by noise. The house phone was ringing, as was my mobile. In my haste I had left it behind. Added to this was Skype donging determinedly on my laptop. Barry was on the train and trying to contact me to let me know when to meet him. When he couldn't get an answer from me he started worrying that something had happened and contacted Gillian to phone, email and Skype me. No-one is allowed to remain unreachable in our family!

As luck would have it, when I left to meet Barry at the station Mark-the-Vet tried several times to contact me. He was phoning every ten minutes to discuss options. It was clear that Buddy had a twisted stomach, usually called gastric torsion or volvulus. There were dangers inherent in an operation; general anaesthesia poses a risk in any animal, more so an elderly one. The stomach wall and abdominal organs might be badly damaged if the blood supply to them had been reduced, and the recovery period was critical. Finally we decided that it was not the right time to let Buddy go – in general, he's fit and healthy, though almost blind. He deserved his chance and so we gave our consent for the operation. Mark-the-Vet phoned at 9:30 that evening to let us know how it had progressed. He had never performed this procedure and had called in another vet, whom he assisted. The stomach was undamaged and had only twisted once. In order to prevent it twisting again in the future it had been stitched to the abdomen wall and Buddy was recovering. Around two hours later Ben-the-Vet, the operating vet, called to tell us that Buddy seemed well but that he would stay overnight to keep an eye on him and would we like him to call us at 3:00 am? We declined! Thursday was an anxious day but my mind and time were occupied very pleasantly by Susannah, who invited me to meet her in London, so I left Barry to wait for news. Mark-the-Vet and Kate-the-Vet phoned two or three times to give an update on the boy's progress and it seemed that Buddy would not be ready to leave for a while. We anticipated him being away over the weekend but on Friday afternoon we were told that we could take him home on Saturday, once final checks had been done. Yesterday, at 3:00 pm, almost exactly three days to the hour that I had rushed him in there, he wobbled out from the treatment area, wagging his tail and obviously pleased to see us. The rest of the animals were excited to see him and sniffed him all over. 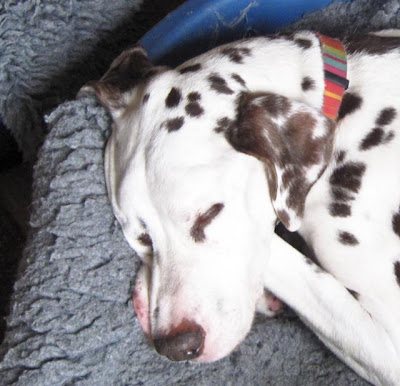 Sleeping peacefully - sleep is the best cure of all!
Last night I slept downstairs with him as managing the stairs would be difficult for him. He was a little disturbed by this – he's accustomed to sleeping in our bedroom - and kept going to the foot of the stairs until I shut the sitting room door. 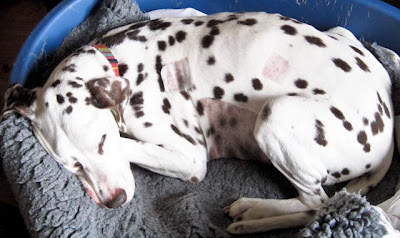 One could be forgiven for thinking that Cruella de Vil had been taking samples!
He woke about 4:00 am and wandered around for an hour or so before having a small meal and going back to sleep. 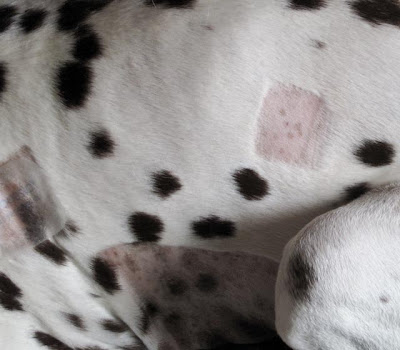 A Dalmatian's spots really are skin-deep! They are spotted within and without - even in their mouths. Buddy has had two analgesic patches. I think the second one may be removed on Monday.
He goes back to the vet for a check-up tomorrow – I don't know whether he'll have a fresh analgesic patch. He has antibiotics for the next few days and needs lots of rest to recuperate. 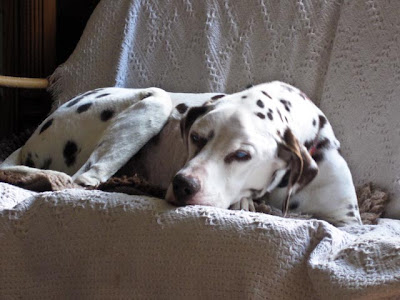 It's good to see him back in his place on the settee! He's a great character and we would have missed him sorely. His time will come – but not just now. There's life in the old dog, yet - and we have our great vets to thank for that!
Posted by jabblog at Sunday, June 20, 2010