Today’s Flowers #97 – foxgloves in the forest 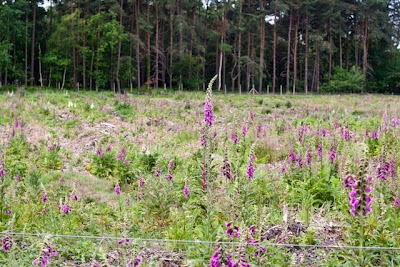 A field of foxgloves (Digitalis purpurea) in the forest. The predominant colour is purple, as the Latin name suggests - or is it magenta? - but there are white and pink flowers too. This enclosure is close to the road, separated by the trees in the background. Last year this ground was covered in mature trees but they were harvested and the ground turned over and replanted with saplings. At present the bracken and the foxgloves conceal the little trees and the deer undoubtedly nibble at them too. We believe this area is fenced in order to stop travellers pulling off the road in convoys of caravans and trailers and setting up camp for weeks or months.The forest workers - not the rangers - would have us believe it's to stop rabbits! We've never seen rabbits in this part of the forest!! 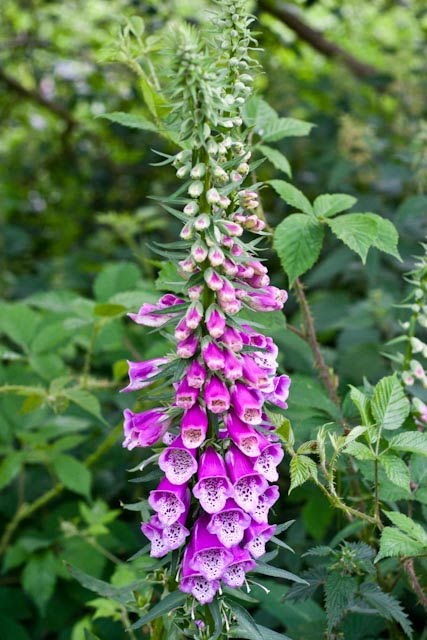 The flower spikes ripen from the bottom up.There may be 20 to 80 flowers on a single stem. 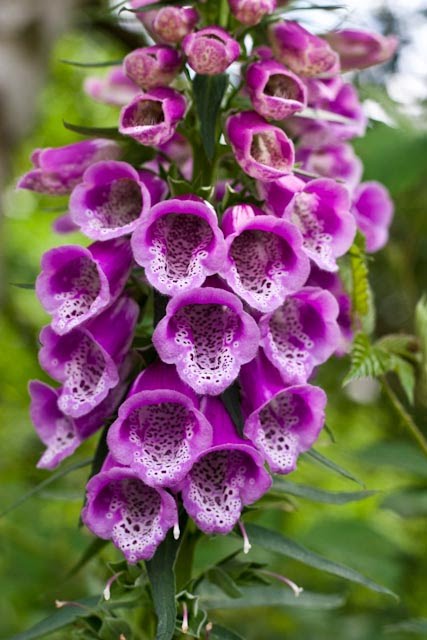 Those bells invite visitors to enter - and they do, in numbers! 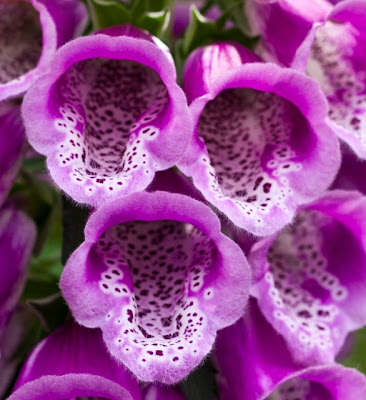 Cropped from the above photograph
This beautiful plant is extremely toxic but gives the drug digitalis, extracted from the leaves of the second year's growth,  which, in small doses, is used in the treatment of heart disease. Its medicinal use was discovered in 1785 by William Withering, though how it worked, by stimulating the heart, was not then understood.
The name is a pretty one for such a splendid plant. Some fancifully believed it was a corruption of 'folks' gloves' the folks being fairy folk. In some parts of Britain it is called 'fairy bells'. In Welsh the foxglove is called 'menig ellyllon' (elves' gloves) or 'menig y llwynog'  (the fox's gloves). The Irish call it 'fairy thimble'.
Another belief was that the bells made suitable gloves for foxes with fox as a corruption of 'folks'.
Thank you to the 'Today's Flowers' team for organising and hosting this meme each week. To see more blooms around the world please click here.
Posted by jabblog at Sunday, June 13, 2010