ABC Wednesday V is for Vermin or ‘Who’d be an aphid?’


Definition from Chambers:
vermin
singular or plural noun
1 a collective name for wild animals that spread disease or generally cause a nuisance, especially rats and other rodents. 2 detestable people. verminous
adj1 like vermin; parasitic; vile. 2 infested with vermin.
ETYMOLOGY:
14c: from Latin vermis worm.
I have stretched the definition and taken the phrase 'generally cause a nuisance' to apply to aphids. The usual colour is green and in Britain they are called greenfly, which sounds quite attractive; they can also be black (blackfly) brown or even pink. In other countries they are known as plant lice, which definitely sounds repulsive. Whatever their nomenclature, they are universally acknowledged as some of the most destructive insects attacking cultivated plants in temperate climes. 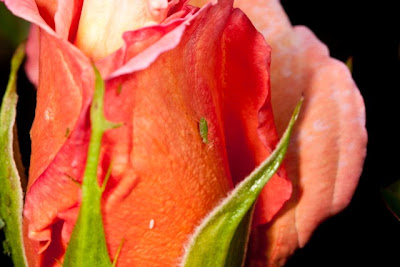 It's rare to see just one greenfly! Where are its friends and relations?
They are very successful organisms and have been in existence for about 280 million years. They are preyed on by many enemies, including birds, ladybirds, parasitic wasps, lacewings and even some parasitic fungi. 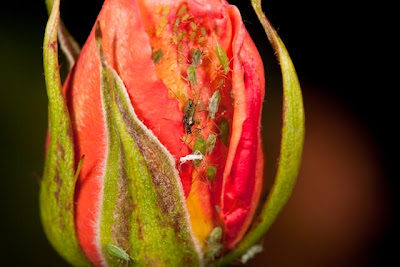 There they are! All shapes and sizes and moulted skins too - delightful!
There is a strange relationship between some ant species and aphids. The ants are said to 'farm' the aphids. They protect their 'ant cows' on the plant food, fighting off predators, and eating the honeydew they produce. These 'dairy farmer' ants have been observed stroking the aphids with their antennae to stimulate them to release honeydew. 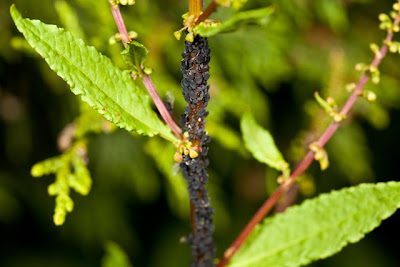 Blackfly on a dock leaf stem. Safety in numbers? 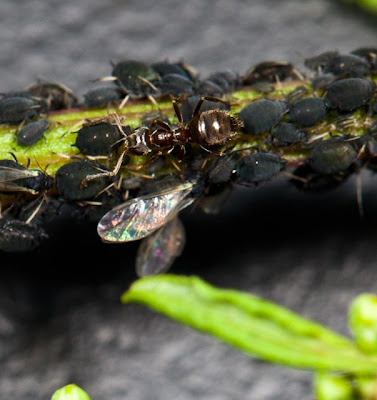 Here is Farmer Ant with his herd. One of the aphids has wings, maybe preparing to fly to another feeding station.
Some species of ants collect and store aphid eggs in their nests through the winter, carrying newly-hatched young back to the plants in the spring.Aphids produce many generations each year. In March eggs that were laid the previous October hatch into wingless females. No males are hatched. As the female nymphs grow they moult several times. Once they reach maturity they give birth to live daughters without recourse to fertilisation, a process known as parthenogenesis or asexual reproduction. The new generation of females grows quickly and reproduces asexually but some of the daughters will develop wings and fly to new food plants. The pattern repeats throughout the summer, with winged and wingless generations generally alternating. A change occurs in October, when the first male aphids are produced. They have wings and fly to a tree to be joined by winged females. These females produce wingless daughters and the males mate with these when they are mature. The resulting eggs are laid on the tree, ready to overwinter. They are black with thick shells to withstand extremes of temperature.
Aphids are very interesting creatures but can cause a great deal of damage. Their numbers increase rapidly, doubling every four to six days. While their natural predators help to control the population explosion, some other means are usually needed. A simple way is to spray them with a strong jet of water – this may not help more delicate plants! Another method is to put a couple of drops of washing-up liquid in a gallon of water and use this mixture as a spray. Companion planting may help. Chives, spearmint, garlic, basil, coriander, alliums are all said to deter aphids. Flowers like nasturtiums are particularly attractive to aphids – the black variety in our garden! – but will keep nearby plants free of them. Sunflowers attract ants and aphids and are such strong plants that they are usually unaffected by these little beasties.
Thank you to Denise Nesbitt and her willing team who organise and host this weekly meme. To see more entries please click here.
Posted by jabblog at Tuesday, June 15, 2010