I have just been reading Denise's post (An English Girl Rambles) about the first gift her husband, at that time her fairly recent boyfriend, gave her. It was so romantic and I sighed happily and smiled and thought, 'What was the first thing Barry ever gave me?'
I asked him a few moments ago if he remembered and he replied instantly and, what is more, correctly! I was most impressed. It was, after all, a very long time ago! He was then an officer cadet at RMA Sandhurst, frantically fit, a boxer (excellent), runner (life-long) and enthusiastic participant in many another sweat-inducing sport and pastime. He was straight-backed, square-shouldered, blue-eyed and blond. To be more precise his hair was sandy rather than golden. It was this that made me compare him to a child's toy, a bear, and to his credit he was touched rather than irritated! The next time he came to see me he gave me a cuddly, growly teddy bear, which kept me company all the times we were apart and who later growled for our small children to make them smile. 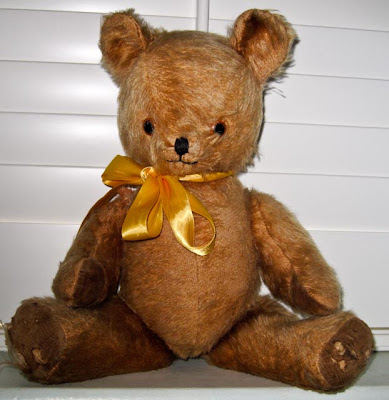 My bear still has his growl, but he lost his original ribbon many years ago – I think it was red. His fur is worn and thin in places and his stuffing is forcing its way out. He really should spend time in the dolls' hospital but I don't want to send him away so he lives quietly in a drawer now, only occasionally emerging for a quick cuddle or, as today, a photo call!

Thank you, Denise, for jogging my memory. My bear was the first of many thoughtful gifts from my husband. Barry's hair is still sandy, touched with grey, his eyes still blue, but the military bearing disappeared long ago, the result, he swears, of all the cross-country running he's done through the decades.
A growly bear and flowers whose heads fell off remain memories that always make me smile – and the fact that he used to shave in the train on his way to see me.
Posted by jabblog at Monday, June 28, 2010