Warning: this post is not suitable for those of a sensitive disposition. Indeed, I'm finding it quite difficult to compose between shudders!
Our garden is full of life and busyness, most of which we welcome, though some visitors are less than pleasing -hornets, slugs and aphids to name just a few. We're happy to see yellow-necked mice and field mice but sadly we are unlikely to encounter them at the moment for they are prey to rats. The annual rat fest has begun! Barry has shot half a dozen in the last few days but still they come, scurrying along with great purpose, anxious to reach the food so generously scattered by the throngs of birds. There is a good deal of plant cover in the garden and the first indication that a rat or two are in the vicinity is a shaking and a shivering of leaves far too noticeable to be caused by any bird. To begin with, they are wary but soon hunger or greed overcomes them and out they bounce to partake of the feast.
Last year we were puzzled because the corpses disappeared (How now! a rat?) and then we saw a crow tucking into a small body (A rat a day) and voilà the mystery was solved or so we thought.
Yesterday Barry shot another one and its remains disappeared overnight. We didn't hear the creaking of wheels as a cart was trundled through the garden with a man ringing a bell and intoning, 'Bring out your dead' so assumed a crow had helped himself – or herself, they're not choosy. Yet another little life came to an end this afternoon (or was it morning? I've been up such a long time that it feels like bed-time and it's only 4:45 – not even time for tea let alone supper!) There were actually two rats out feeding, of differing sizes, rather worryingly, so obviously from different litters. We haven't seen the mamas and the papas and the full-grown siblings but Barry didn't take kindly to my suggestion that a little night shooting might be in order! He dispatched one and then went out to ensure it was completely dead, firing a few more rounds into it to make absolutely sure. The tiny carcase was well hidden under the dock leaves that grow so willingly to complement the nettles and yet a short while later it was revealed in all its gory glory. Neither of us had moved it and the dogs – fortunately – ignore such horrors. 'It was a crow,' we confidently told each other. Not so! About an hour after this I spotted a magpie having a royal banquet. He – or she – was feeding to allay hunger, not to collect titbits to take to a youngster. 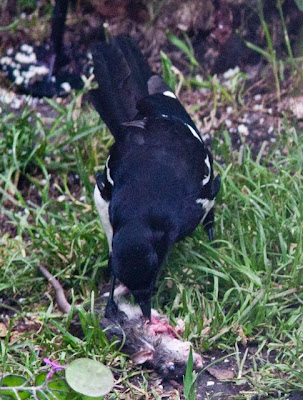 See how it's holding its meal down - just in case it should run off? 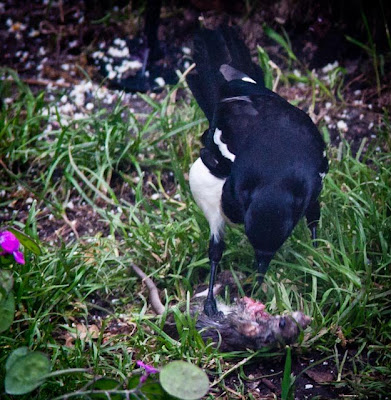 There are young magpies around – they are easily recognised by their shorter tails – but this magpie was not feeling magnanimous to its offspring. I suppose we were right in a sense, as magpies are corvids just like carrion crows. So you see, we feed a rich and varied diet to the birds that visit us, sometimes unintentionally, in the matter of herons and sparrowhawks. I wondered idly if the red kite that soars overhead most days might deign to come and dine in our little plot but I think its five-foot wingspan might make it difficult for it to land where the once-upon-a-time rat is lying. I live in the hope of being proved wrong!
Posted by jabblog at Thursday, June 10, 2010