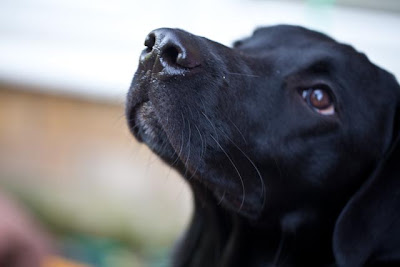 Hello everyone!Before I go any further I just want to assure all my blogging friends out there that I'm ALL RIGHT so please don't worry about me!I told you a little while ago that I was born with an 'unbelievable hernia' which we all hoped was going to repair by itself. (Actually, I've discovered now that it's called an 'umbilical hernia' – sorry if I confused anyone!) 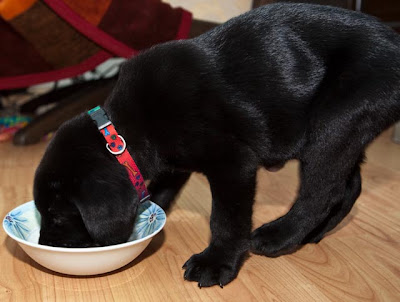 This is me at eight weeks old. I'd just joined my new family and I was smaller than the cats. You can see my hernia quite clearly. 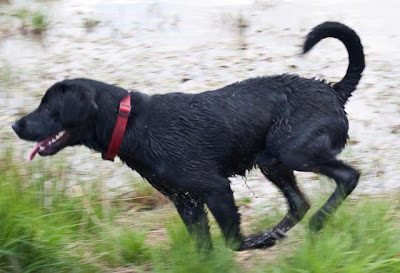 This is me a couple of weeks ago. My hernia doesn't show as much here but you can see water dripping from it.
Anyway, I was nearly nine months old and it still hadn't closed up so last Wednesday I went to see Nadia-the-Vet and she said I'd have to have an operation. I didn't know what that meant but Nadia-the-Vet and Mr Human seemed quite relaxed about it so I decided not to worry. On Thursday the morning routine changed. Usually I get up around 5:30 or 6:00am and have my first breakfast. I generally have two breakfasts – sometimes three. After my first breakfast I go back to bed for a couple of hours and then I have my second breakfast when the others have their first meal. If Jenna doesn't come downstairs with Buddy and Frodo and has hers later I occasionally have a third meal to stop me jumping all over her. I'm not a greedy chap but I am a Labrador and I have to maintain the breed standards. (That's different to the 'Breed Standard' that the show dogs have to fit, in case you're wondering . . . )


Anyway, as I was saying, everything was different on Thursday. No breakfast, for a start – that was very odd, and I was ever so hungry. The next unusual thing to happen was that Mr H took me out on my own. I was excited about that – it's always fun to go out – but I was a bit nervous, too, 'cos I like to go out with the other dogs. I was really surprised when we got out of the car and I saw that we were at the vets' surgery again. I mean, I'd only been there the day before! Mr H took me in and then he left me there and that was exceedingly peculiar but I didn't have time to wonder about it 'cos the nurses made a fuss of me and put me in my own little kennel. I didn't like that much as I like to wander around and see people but they told me it was 'for my own good' so I stopped fussing and went to sleep wondering when I was going to have something to eat. The next thing I knew was that one of the nurses shaved some of the fur off my front paw. It didn't look very smart but she said it would soon grow back. Then I fell asleep again and when I woke up my tummy felt a bit sore but I sat on one of the nurse's laps so that was all right. I'm a big boy but I am still a puppy and I do like my cuddles. Later on Mr H came to fetch me and take me home. All the others were ever so pleased to see me and sniffed and licked me but I was quite tired so I soon went to sleep again. I didn't feel quite right but I had a small supper and then we all went to bed.

On Friday and Saturday, I had my two breakfasts as usual but we didn't go out for a walk as my Humans said I ought to rest a little more. On Friday I was licking my tummy so Mrs H put a stiff collar on me to stop me. I didn't like it at all! She gave me some biscuits to make me feel better but I was miserable and didn't want them. Once I'd promised her I wouldn't lick again she took the 'Collar of Shame' off and then I wolfed down the biscuits. 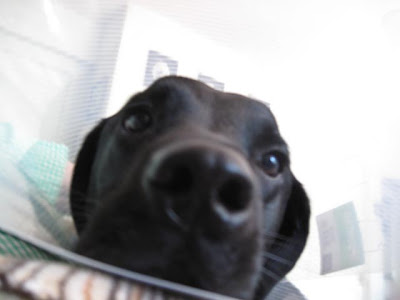 I really didn't like the collar - it frightened me and I couldn't lie down. 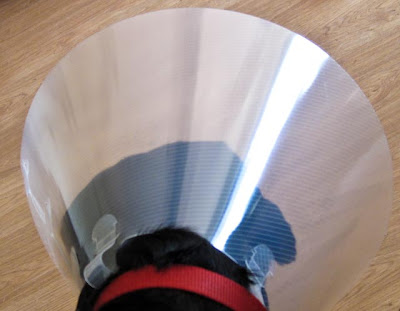 It wasn't tight on me and it didn't hurt but it felt very strange. 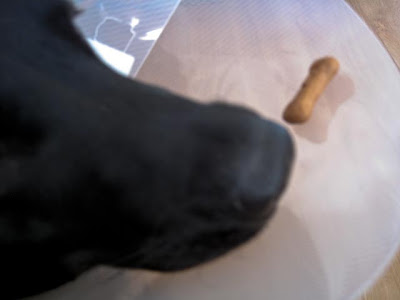 I wasn't interested in the biscuits Mrs H gave me. You can see there's one right next to my nose!
Sunday was better 'cos we went walking but it was quite strange. Ordinarily I rush about and then have a jolly good swim. I couldn't do either of those things 'cos I was wearing a special harness that gently stopped me galloping off and we didn't go near any water. I was disappointed about that but it was good to go out. We weren't out for long but by the evening I was beginning to feel really uncomfortable. We all went up to bed but I just couldn't get comfortable and went to sleep sitting up leaning against Mrs H. My Humans were worried about me 'cos I was breathing fast though once I was fast asleep they said I was breathing normally. In the morning Mr H took me to see Kate-the–Vet who made a big fuss of me and gave me an injection so that I wouldn't feel the pain again. Today he went to get some 'Meloxidyl' 'cos I was starting to hurt again. I'll be completely better very soon – that's what my Humans are telling me, anyway – and most of the time I'm completely happy, mobbing Jenna and Winston and chewing pens, shoes and other interesting Human possessions as well as playing with my toys. I'm going to see the nurse on Friday and then maybe I can get back to my usual exercise – can't wait!

Do you know how much I weigh? I'm 28.5 kilos - that's nearly 63 pounds. I've only got to grow a bit more and I'll be as big as Frodo - wheeee! (I really like Frodo - he's cool! - and handsome!) Frodo and I hang out together in the garden under the bird feeders. We like to tidy the garden for our Humans 'cos those birds make such a mess - and we quite like clearing up the bits of fat cake. Sometimes when it's hot the fat melts and it drips onto me. It doesn't get on Frodo - I don't know why. 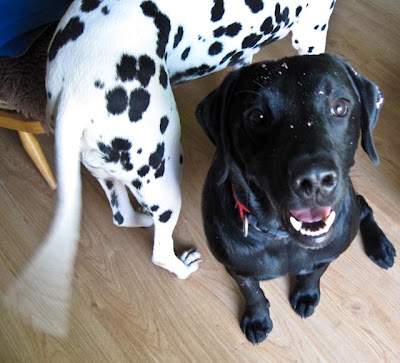 The 'very berry'cake is a pretty pink and I think it rather suits my dark good looks. What do you think?
Mrs H was a bit cross with me even though she was laughing and I was worried she might put the collar of shame on me again so I did what I always do to show her how much I love her. 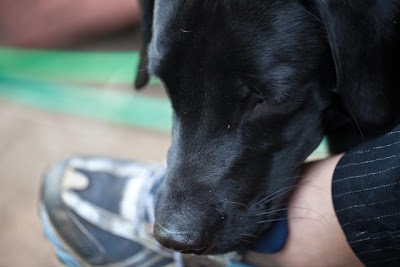 Also my head on her foot means she can't get up quite so quickly and then she might forget all about the c.o.s. I'm not stupid!

That's all for today!